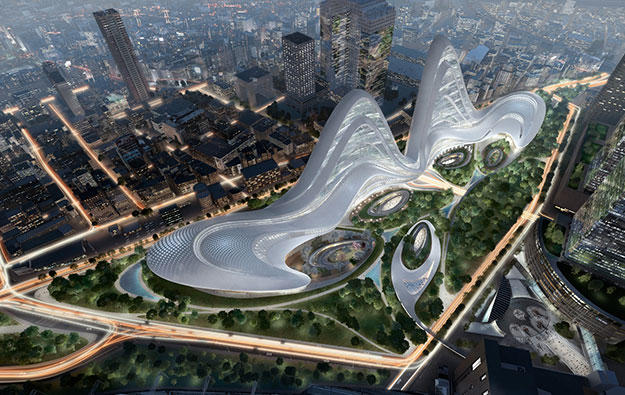 Later that day Melco Crown issued a press statement with further comments from Mr Ho regarding Japan. It gave specifics on two possible locations in the city of Osaka – Umekita and Yumeshima.

The press notice quoted Geoffrey Davis, executive vice president and chief financial officer of the group, as saying Melco Crown had previously explored potential locations in Tokyo and Yokohama as well as Osaka.

The release gave what the firm termed a “sneak peek” at suggested designs, revealing some artists’ renderings (one pictured above). The firm said the design for Umekita was the work of the late Anglo-Iraqi architect Dame Zaha Hadid. She created the Morpheus hotel tower at the firm’s City of Dreams Macau property. It is due to be completed in early 2018.

“There currently is no predetermined cap on our intended investment in Japan; our focus is on uniqueness, great design and world-class entertainment offerings,” Wednesday’s press release quoted Mr Ho as saying.

“We are determined to work with the Japanese government and local partners and communities to create the city’s first integrated resort which delivers long lasting benefits to Japan,” he added in the release.

Mr Ho’s comments regarding the firm’s open-mindness on capital budget hinted at a possible bidding war between existing casino operators for a slice of a Japanese market consisting of locals and increasing numbers of overseas visitors. CLSA estimates a Japanese casino industry could be worth US$10 billion annually even if only two resorts were permitted.

On Tuesday, James Allen, chairman of United States-based casino investor Hard Rock International Inc – a company that has a business relationship with Mr Ho in other markets – told Reuters his business was eyeing a Japan casino project, touting an approximately 40 percent equity share for any Japanese partner.

The Financial Times reported additionally that Mr Adelson had described Tokyo itself as “the holy grail” when it came to selecting a location for such a venue.

As well as having a huge population, Tokyo is also a major tourism centre. According to the English-language website of the Tokyo Metropolitan Government, as of October 2015, the population of Tokyo was estimated to be 13.49 million, or about 11 percent of Japan’s total population.

The snow-capped volcano Mount Fuji outside Tokyo and the city’s Imperial Palace and Nijubashi Bridge, regularly appear near the top of the rankings for Japan’s most popular tourism attractions. Tokyo also stands to gain extensive global media coverage soon as the host of the 2020 Summer Olympics.

“There are some countries that think if you put an integrated resort somewhere in the boonies [a backwater], you will attract a lot of other businesses. That’s a mistake,” Mr Adelson was quoted by the Financial Times as saying.

Among Japan’s large population is a portion with a strong interest in the quasi-gambling pastime pachinko. Some Japanese lawmakers fret about the risk of gambling addiction among locals, and have talked about a “Singapore-style” system of regulation possibly including an entry levy for locals; but the country is trying to boost the number of foreign visitors to its shores, with casinos as one possible lure.

Mr Ho said in the statement issued by his company on Wednesday: “Melco Crown has consistently demonstrated its industry leadership in respect of social safeguards and has upheld the highest standards of corporate governance and social responsibility.”

In March last year, the Japanese government said it was setting a target of the country welcoming 40 million foreign tourists annually by the year 2020. In January this year, the Japan Times reported that in 2016 the number of overseas visitors to the Asian nation rose 21.8 percent to 24.04 million. Tourist spending that year grew 7.8 percent to JPY3.75 trillion (US$33.1 billion). Visitor numbers and spending were said to be all-time highs.

Mainland Chinese travellers spent an estimated JPY1.48 trillion last year – 39.4 percent of the total – followed by those from Taiwan at JPY524.5 billion and South Korea at JPY357.8 billion.

“[Japan’s] the ultimate of business opportunities. Singapore was a warm-up to this,” said Las Vegas Sands’ Mr Adelson, referring to his multibillion U.S.-dollar investment in a casino resort called Marina Bay Sands in the latter city-state.

Lawmakers passed on December 14 a bill to legalise casinos in Japan. Several investment analysts have said that – with a second piece of legislation required to create the regulatory framework for the industry and the location of venues – it could be beyond the year 2021 before the first Japanese casino resort opens.

Only two of Macau’s 18 satellite casinos – the Rio Casino and the President Casino – have closed amid changes to the city’s regulatory system for such properties, and against... END_OF_DOCUMENT_TOKEN_TO_BE_REPLACED