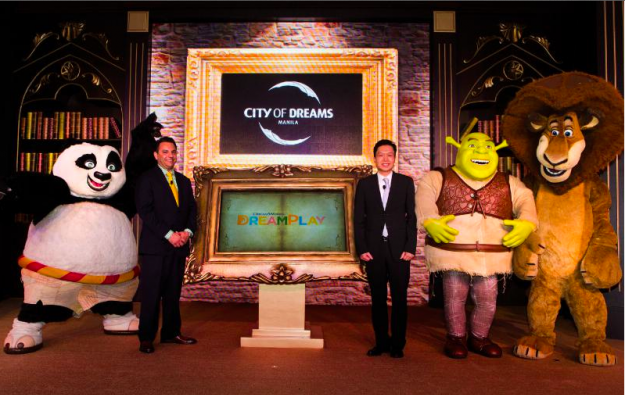 “Melco Crown Philippines is delighted to be introducing DreamWorks to the Philippines as we continue our strategy of delivering innovative leisure and entertainment offerings,” said Clarence Chung, chairman and president of the company.

“The ‘DreamPlay’ concept delivers an education experience through spontaneous and sensory play that represents an industry first,” Mr Chung added.

The US$1.2-billion City of Dreams Manila is being developed and will be operated by Melco Crown Philippines in alliance with SM Group’s Belle Corp at Entertainment City along Manila Bay. It will feature up to approximately 365 gaming tables, 1,680 slot machines and 1,680 electronic table games upon opening. The property is scheduled to open later this year, likely in the fourth quarter.

Each experience will be designed exclusively for City of Dreams Manila, aiming at creating a “one-of-a-kind family adventure”.

“We are very excited… to build something that we believe is a truly unique way for children to experience, learn and interact with the characters and worlds of DreamWorks Animation,” said Paul Kurzawa, head of global retail development and entertainment at DreamWorks Animation.

This is the second time DreamWorks Animation signs a deal with a casino operator in Asia, following the one announced last year with Macau-based Sands China Ltd for its Cotai Strip resorts.

Macau’s casino gross gaming revenue (GGR) for the first five days of February is estimated at MOP1.9 billion (US$235.1 million) – or MOP380 million per day – a level that suggests a “45... END_OF_DOCUMENT_TOKEN_TO_BE_REPLACED