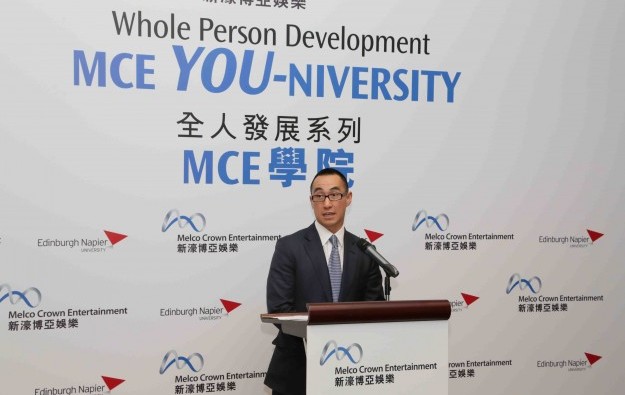 Asian casino developer Melco Crown Entertainment Ltd has linked with Edinburgh Napier University in the United Kingdom to launch next year the company’s first in-house bachelor degree. The initiative, called “MCE YOU-niversity” is part of what the company terms its “Whole Person Development” programme. It enables employees to gain new qualifications, or to complete past education, while in work.

Under the MCE YOU-niversity programme, employees at Melco Crown with at least five years of work experience as managers or supervisors are given credits for the undergraduate course – which would normally take four years of study – and are able to enter the degree course at the equivalent of year three.

The bachelor programme has 15 students in the first intake. It will have six study modules: international marketing; introduction to accounting; casino management; international business; strategic management in a global context; and service management.

The teaching will be mostly in Macau and involve some input from academics from the U.K. university.

Referring to that process of internal transfer, she said: “It’s better to lose people to ourselves than to lose them to competitors. So we need to allow them to have access to the jobs they’d like to try.”

As a condition of entering the course, participants must commit to staying at the company for a period after graduation. The period of time was not specified.

Ms Takahashi said on the sidelines of the event that the company would cover the tuition fees of workers on the programme. She added that sufficient workers had been hired for the new casino resort Studio City, which is 60-percent owned by Melco Crown and is set to open on Cotai on October 27.

Macau’s six casino operators are in a tussle to hire new employees and to retain their best staff as well as to improve the productivity of their workforce at a time of falling casino gross gaming revenue.

A note from investment bank Morgan Stanley issued on September 15 said of the Macau operators’ attempts to control operational costs in the gaming downturn: “inability to cut local staff, …5 percent per annum [salary] increment and two months bonus per annum have made this cost cutting exercise a lot more difficult than [in] many other industries”.

The imminent return of package tours from mainland China will not only help boost Macau’s tourism businesses, but is also expected to help casinos gain more foot traffic in their mass gaming... END_OF_DOCUMENT_TOKEN_TO_BE_REPLACED