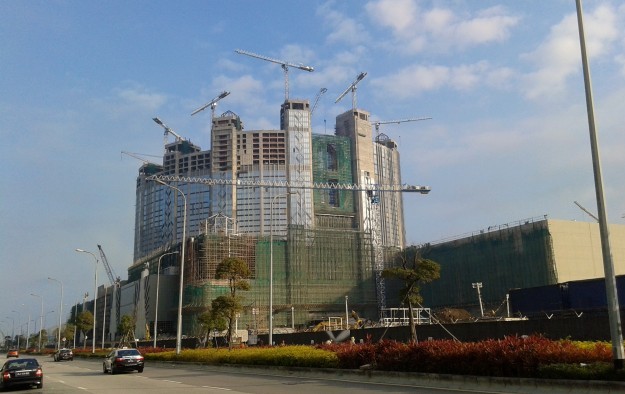 The acquisition by Melco Crown Entertainment Ltd (MPEL) of the minority investor in the US$3.2-billion Studio City scheme (pictured) has become “more likely” in light of the new gaming table allocation in Macau, analysts at Sanford C. Bernstein Hong Kong Ltd said in a note on Friday.

“We believe a low table allocation (which is likely in the cards as telegraphed by Galaxy) could be the catalyst for MPEL to acquire New Cotai’s interest in Studio City,” said the Sanford C. Bernstein team led by Vitaly Umansky, the firm’s senior research analyst for global gaming.

The note was referring to a recent a casino opening by rival operator Galaxy Entertainment Group Ltd and to the Macau government’s cap on the number of live dealer tables that can enter the market between now and 2022.

Melco Crown is a 60 percent equity investor in the current Studio City scheme. In June 2011, the casino firm paid US$360 million to take over leadership of the scheme from some previous investors. The project had lain with its foundations part built since 2007 after the original set of investors couldn’t all agree on the funding.

The Macau government has said that gaming table allocation for new casino projects in the territory would be decided by a range of criteria including each scheme’s contribution to non-gaming tourism, to employment and to career development of locals, as well as each operator’s general contribution to diversification of the local economy.

“Although MPEL has some underutilised table capacity (at Altira in particular), the joint venture structure of Studio City may make table shifting less palatable,” the analysts said.

“Such an acquisition should be a strong near-term catalyst as the overhang associated with the joint venture structure at Studio City is [would be] eliminated and investor concerns about the operational effectiveness of Studio City are removed.”

“We believe the shareholders of New Cotai are sellers of their stake and MPEL retains a strong bargaining position in any buyout discussion,” they added.

Melco Crown, co-chaired by Lawrence Ho Yau Lung and James Packer, said in its 2014 annual report in April that it might technically fall into default on an approximately HKD10.86-billion (US$1.4-billion) Studio City project loan if it is unable to open the casino resort by October 2016 “with a minimum 400 gaming tables available for operation”.

In Friday’s note, the Sanford C. Bernstein team said they believed gaming table allocation in the Macau market matters, “but only to some extent”.

“We believe additional tables will be granted in phases. The initial table allocation is not a concern as long as operators can optimise the utilisation of their existing table inventory,” they said. “We believe the government will likely provide operators with additional tables in a phased (and likely not overly public) manner.”

The investment research firm also said the month of May showed “the first glimmer of the beginning of a potential bottoming of fundamentals” in the Macau gaming market, as the month “experienced sequential improvements” in average daily revenue.

“We expect margin compression [for casino operators] to likely persist until industry GGR decline stabilises in the latter part of 2015 and operators are able to begin adjusting cost basis,” the analysts said.

Sanford C. Bernstein lowered its 2015 GGR forecast for Macau to US$33 billion, from US$35 billion, representing a fall of 25 percent from 2014. The firm expects VIP revenue to decline by 35 percent year-on-year, while GGR from the mass segment may drop by 10 percent.

“We expect to see a bottoming by the latter part of the year with rejuvenated growth beginning in 2016,” it said.

The Macau government announced on Thursday the cancellation of a plan for a nucleic acid test certificate requirement with 48 hour validity, for casino staff, casino customers and official visitors... END_OF_DOCUMENT_TOKEN_TO_BE_REPLACED