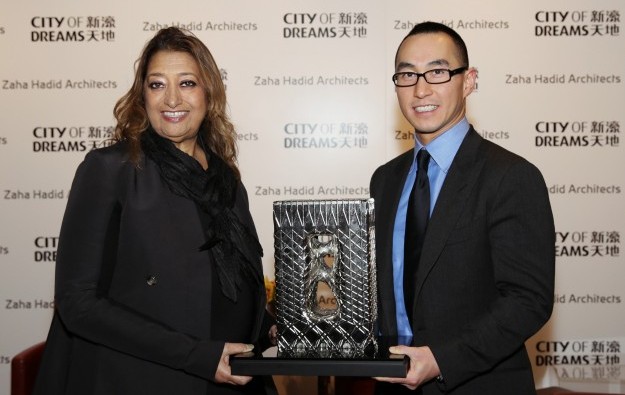 Asian casino developer Melco Crown Entertainment Ltd says it does “not anticipate any impact on the construction progress” of the fifth hotel tower at its City of Dreams casino resort in Cotai, Macau following the death in the United States of the tower’s award-winning architect Dame Zaha Hadid (pictured left in a file photo, presenting a model of the tower).

U.K. broadcaster the BBC on Thursday said Ms Hadid had died following a heart attack that day in a Miami, Florida, hospital, where she was reportedly being treated for bronchitis.

Melco Crown said in a statement emailed to GGRAsia on Friday: “We are deeply saddened by the news of Dame Zaha Hadid’s passing and would like to extend our heartfelt condolences and sincere regards to her family and colleagues at Zaha Hadid Architects during these difficult times.”

The casino firm added: “We do not anticipate any impact on the construction progress of City of Dreams’ fifth hotel tower as the architectural designs are already in place and the construction will continue in close cooperation with Zaha Hadid Architects, other professional parties and contractors on the project. Zaha Hadid Architects will continue the great work of Dame Zaha Hadid to make City of Dreams’ fifth hotel tower the iconic landmark in Macau.”

Melco Crown stated in a press release in March 2014 that the fifth tower at City of Dreams would have 40 floors and a gross floor area of 150,000 square metres (1.6 million sq feet), containing approximately 780 guestrooms, suites and villas.

A number of Macau luxury hotels inside casino resorts still had, as of Thursday, rooms available for every night of the upcoming week-long Chinese New Year (CNY) holiday period, according to checks... END_OF_DOCUMENT_TOKEN_TO_BE_REPLACED