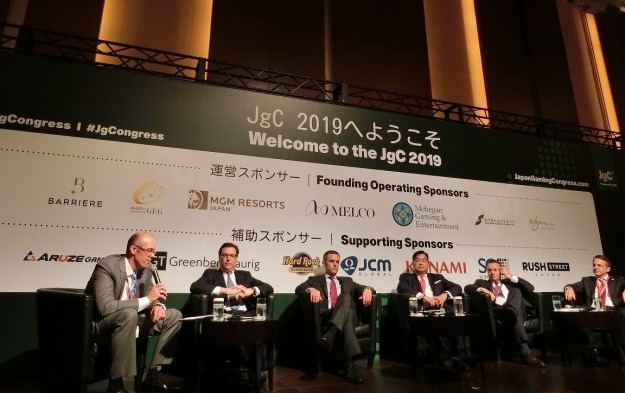 Although casino entrepreneur Lawrence Ho Yau Lung of Melco Resorts and Entertainment Ltd anticipates the total cost of a Japan casino resort to be more than US$10 billion, his own firm might only be required to find half of that, suggested his group chief financial officer Geoffrey Davis in a closing panel at the Japan Gaming Congress 2019 on Friday.

Mr Davis (pictured second left) – who is also chief executive and representative director of Melco Resorts and Entertainment Japan Ltd – said it was likely Melco Resorts would spend “dollar-to-dollar” with a local partner; with the total project cost likely to be 50 percent equity and 50 percent debt.

The executive didn’t clarify whether one partner on a Japan scheme might contribute proportionately more via debt, than did the other.

A number of investment analysts covering Japan commercial real estate markets has noted that for several decades, the challenge for Japanese corporations has been not how to borrow money, but how to find effective investment yield on the capital they have accumulated. The North American business model has been typically to apply leveraging – using someone else’s money – to help build commercial projects, and then pay back the capital costs over time.

Mr Davis was responding to a question about the possible division of costs between overseas and local partners in a Japan casino resort – referred to in that market as an integrated resort or “IR”; and the proportion of debt to equity funding.

The executive stated: “My guess is… if anything, Melco’s plan will end up exceeding US$10 [billion]. But that being said, our conversation with some of the mega-banks here in Japan – the guidance we are getting – is a sort of 50-50 split between debt and equity. That’s a little more conservative, i.e., more equity, than some jurisdictions.”

But he added: “Melco is very flexible about how to move forward and 50-50 is something we can certainly live with.”

His colleague Chris Gordon had earlier told the conference that a Wynn Resorts’ Japan property would in likelihood cost more than the US$4.4 billion Wynn Palace in Macau.

Mr Billings said: “The local banks [in Japan] that we got engaged with so far have been incredibly open-minded and thoughtful about financing. I do think you’ll see perhaps the addition of some lower-level tranches of debt, funded internationally…”

It has been reported that – among the maximum three casino licences permitted in a first phase of Japan liberalisation – one might be available for a smaller regional resort.

Ado Machida (third right), president of Hard Rock Japan, a local unit of U.S. casino group Hard Rock International, told the panel about the sort of capital expenditure expected for such a scheme: “We have been very clear about the fact that we’re only pursuing Hokkaido as a regional IR. There we are probably looking at about US$3 billion to US$4 billion worth of investment.”

How that is apportioned, “depends on the size and also the partners,” he added.

The executive further stated that a potential issue regarding debt for such projects was whether the banks would have confidence in the local partners.

He said: “I think the partners, especially the [prospective] Japanese partners, also lack credibility for mega-banks…. And some reassurances [are needed] with respect to lending to [such a] partnership.”

Mr Machida added: “Hard Rock is proud to have credit ratings from three agencies. So from that perspective, the debt portion and the equity portion [issue] becomes easier.”

His group is already pursuing a casino project in South Korea and is also a suitor for a Japan regional licence.

He stated with regard to the proportion of overall funding contribution from foreign casino operator versus local Japanese partner: “It depends on a number of factors. One is to what extent the local partners want to be involved in the regulatory and licensing process.”

Japan has already flagged extensive regulatory and licensing conditions for its licences; factors likely in themselves to carry significant costs for investors.

It is likely that Macau will shortly have a third round of citywide centre-based Covid-19 testing in little more than a week, after the results so far of a second mass test – that was due to finish... END_OF_DOCUMENT_TOKEN_TO_BE_REPLACED