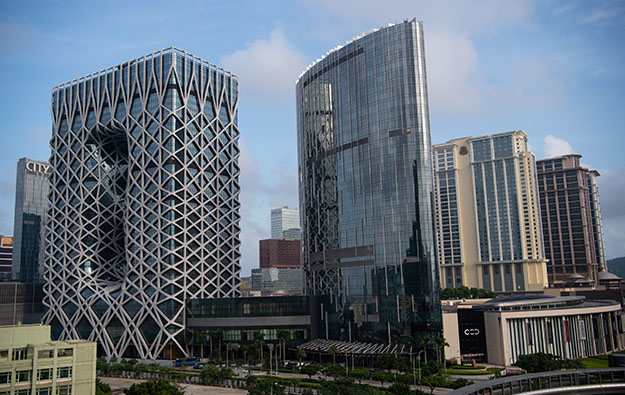 Melco Resorts and Entertainment Ltd reported on Wednesday a 75.1-percent year-on-year increase in net profit for the second quarter of this year.

The developer and operator of casino resorts in Macau and the Philippines said the net income attributable to the company for the period ending June 30 was about US$100.3 million, compared to US$57.3 million in the corresponding period last year.

The Nasdaq-listed company reported total operating revenue for the second quarter of just over US$1.44 billion, an increase of about 17.4 percent compared to the nearly US$1.23 billion recorded in the same period last year.

“The increase in total operating revenues was primarily attributable to better performance in the rolling chip and mass market table games segments and higher non-gaming revenue as a result of the opening of Morpheus in June 2018,” the firm stated.

The latter was a reference to a five-star hotel tower (pictured left) which opened in June 2018 as part of the City of Dreams Macau complex.

The group’s adjusted property earnings before interest, taxation, depreciation and amortisation (EBITDA) were US$442.2 million for the second quarter, compared US$355.5 million in the first quarter of last year – an increase of 24.4 percent and a new company quarterly record, according to the firm.

Melco Resorts stated the amendment to its quarterly dividend policy reaffirmed the firm’s commitment “to returning surplus capital to shareholders.”

In a conference call with investment analysts following Melco Resorts’ results announcement, the firm’s management was asked about the impact on its Manila operations of a decision by Macau junket investor Suncity Group to stop proxy betting at overseas locations. According to previous media reports, the junket firm – said by investment analysts to be one of the largest VIP gambling organisers in Macau – has operations at City of Dreams Manila.

“At City of Dreams Manila, we ceased providing video feeds for marketing purposes,” said Kevin Benning, senior vice president and chief operating officer of Melco Resorts and Entertainment (Philippines) Corp. It was not clear from his reply when had such decision been made, namely if it was related with the Suncity Group case.

He added: “At this point, it is too hard to draw any conclusions on business trends and we will continue to monitor and assess” the situation.

Brokerage Sanford C. Bernstein Ltd said in a Wednesday note that “while management did not comment on the potential financial impact of this decision, based on our understanding, proxy betting is not a meaningful contribution to City of Dreams Manila’s bottom line.”

The Sanford Bernstein team added: “We estimate a low-single digits of percent impact to City of Dreams Manila’s EBITDA.”

Earlier this month, Chinese state-backed media alleged that Suncity Group had been involved in operating an online gaming platform for play outside Macau. Suncity Group publicly denied the online gaming allegations, adding it had decided that even if certain “products” were “legally allowed to operate in other countries and regions”, the company would not adopt them “if the laws of Macau do not allow it”.

In an email to GGRAsia on Tuesday, Suncity Group confirmed it had already “stopped overseas telebetting as promised.”

Proxy betting was effectively banned by the Macau government in 2016, and has since become popular in the Philippine casino market, according to a note issued by Goldman Sachs (Asia) LLC last week. Both Goldman Sachs and Chinese investment bank China International Capital Corp (CICC) have remarked that the VIP gaming earnings of casinos in the Philippines could suffer if proxy betting were no longer pursued in that market.

He added: “Also, despite market-wide VIP softness, Melco Resorts still managed to deliver modest VIP revenue growth, which implies that the company took significant market share in both the mass and the VIP gaming segments during the second quarter.”

The City of Dreams Macau complex in Cotai remained the single biggest provider of Melco Resorts’ EBITDA during the second quarter. Adjusted EBITDA at City of Dreams increased by about 46.2 percent in year-on-year terms to US$250.8 million.

Rolling chip volume at the property totaled US$14.9 billion for the second quarter of 2019, a year-on-year increase of 41.9 percent. Mass-market table games drop rose by around 16.1 percent in year-on-year terms to US$1.37 billion.

Mr Ho added that the firm had budgeted between US$1.35 billion and US$1.4 billion for the second phase of the Studio City casino resort, also in Macau’s Cotai. According to Melco Resorts’ management, there were no plans to issue additional equity to raise funds for the project: instead, the scheme would be funded via cash on hand and borrowings.

Mr Ho added that piling mobilisation for the second phase of Studio City was expected to start by the “middle of September”. The project is to feature gaming and non-gaming elements, including “one of the world’s largest indoor water parks,” he said.

During the second quarter, adjusted EBITDA at Studio City increased by about 29.5 percent in year-on-year terms to US$94.8 million. Melco Resorts stated that “was primarily a result of better performance in the mass-market table games segment, partially offset by a softer performance in the rolling-chip segment and lower non-gaming revenue.”

Melco Resorts opened in May the Flip Out trampoline park at Studio City. The company said on Wednesday it planned to open “soon” the permanent, 50,000 square feet (4,645 sq metres) Legend Heroes VR Park, “which should be Asia’s largest virtual reality zone”.

“We expect these new entertainment attractions to further elevate the mass gaming and non-gaming revenue of the property,” Mr Ho said.

During Wednesday’s conference call, Mr Ho also discussed Melco Resorts’ decision to delist its Philippine subsidiary from that country’s bourse. “We believe the delisting of Melco Resorts Philippines results in a simpler corporate structure,” he said. The delisting became effective in June.

City of Dreams Manila generated EBITDA of US$82.8 million in the second quarter, compared to US$87.3 million in the comparable period of 2018, a decrease of 5.2 percent. The property recorded declines in both rolling chip volume and mass-market table games drop in the three months ended June 30.

In his conference call comments, Mr Ho discussed Melco Resorts’ interest in investing in a casino resort in Japan as part of the country’s nascent casino industry. He noted that the firm had participated in the Yokohama casino request for information process, and would also take part in Osaka’s casino resort request-for-concept phase.

Some Macau casinos visited by GGRAsia on Thursday, actually had tables that were closed, notwithstanding strong consumer demand during Chinese New Year (CNY). The reasons for some tables being... END_OF_DOCUMENT_TOKEN_TO_BE_REPLACED