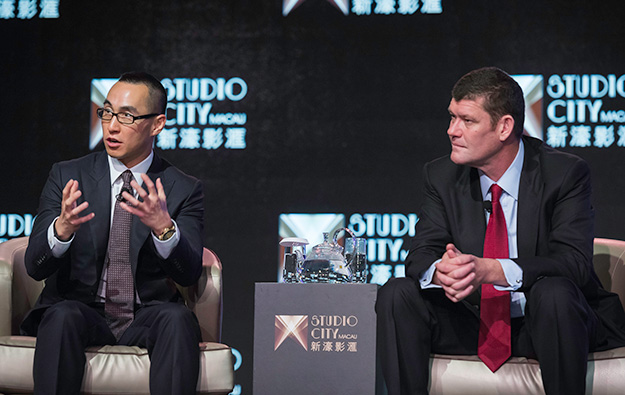 The controlling shareholders respectively of casino operator Melco Resorts and Entertainment Ltd and Australia-based Crown Resorts Ltd had discussions in the first half of 2019 about a potential full merger between the two companies. The information was disclosed on Wednesday by James Packer (pictured right in a file photo), the largest shareholder of Crown Resorts.

Mr Packer’s comments were made while under questioning during an Australian public inquiry into the Crown Resorts’ suitability for a casino licence in New South Wales. The Australian company is currently developing a casino complex at Barangaroo in Sydney, New South Wales.

Melco Resorts, with casino operations in Macau, Cyprus and the Philippines, is headed by Lawrence Ho Yau Lung (pictured, left).

“Lawrence briefly touched on a full merger between Melco [Resorts] and Crown but quickly got to the position where that didn’t suit him and didn’t really serve me,” Mr Packed said.

The businessman did not elaborate on why the plans for a merger never went ahead.

He added: “Lawrence was interested in doing something with Crown, if we could make it work. He believed in the assets.”

In late May 2019, Melco Resorts agreed to buy a near 20-percent stake in Crown Resorts in two tranches, for a total value of about US$1.2 billion at contemporary exchange rates.

The first half of the deal – for about 9.99 percent – went through, but the second didn’t happen; and in April this year, Melco Resorts disposed of the tranche it did hold, at a 37-percent discount.

Nasdaq-listed Melco Resorts was originally established in 2004 as a joint venture between Hong Kong-listed Melco International Development Ltd – a company controlled by Mr Ho – and the firm that eventually became Crown Resorts.

The combined venture was involved in developing several Macau casino resorts, including Crown Macau in Taipa – now known as Altira Macau, and which opened in 2007 – and City of Dreams Macau, on Cotai, which launched in 2009.

At the start of May 2016, Crown Resorts – alongside Melco International – each held a stake of 34.3 percent in the joint venture. But in early May 2016, Crown Resorts said it was cutting its holding in the venture to 27.4 percent. Further sell downs by Crown Resorts occurred in the space of several months, with the Australian company selling its remaining stake in Melco Resorts in May 2017.

Crown Resorts’ divestment in Melco Resorts came as the firm scaled down its international presence after an incident in 2016 that led to the arrest of several of Crown Resorts’ employees in mainland China. The latter matter has also been a topic raised during the public inquiry by the New South Wales Independent Liquor and Gaming Authority.

Mr Packer also discussed on Wednesday whether he had checked if Stanley Ho Hung Sun, former monopolist in the Macau casino market who died last May, had links to Melco Resorts when the latter acquired its stake in Crown Resorts in 2019.

Mr Stanley Ho’s name had previously been linked – according to publicly-available information – with local concerns in Australia that the businesses he founded had ties to Chinese organised crime. He always denied such allegations.

Mr Stanley Ho was the father of Mr Lawrence Ho. According to available information, as of 2019, Mr Stanley Ho held – via a trust – a stake in Melco Resort’s parent Melco International.

In a statement in August last year, Melco Resorts told GGRAsia that Mr Stanley Ho did “not exercise any influence” over Melco Resorts.

“I regarded Melco Resorts as Lawrence’s company, not Stanley’s,” Mr Packer said on Wednesday, when asked about the topic.

“I believed that [any issue regarding Mr Stanley Ho] would have been found in the legal preparation for the transaction,” he added. “I left it to my legal team, and I gave it no thought, I had forgotten,” added the businessman.

Michael Johnston, a non-executive director of Crown Resorts and representative of Mr Packer’s interests in the casino firm, said last week he had not checked whether Mr Stanley Ho still had a stake in Melco Resorts.