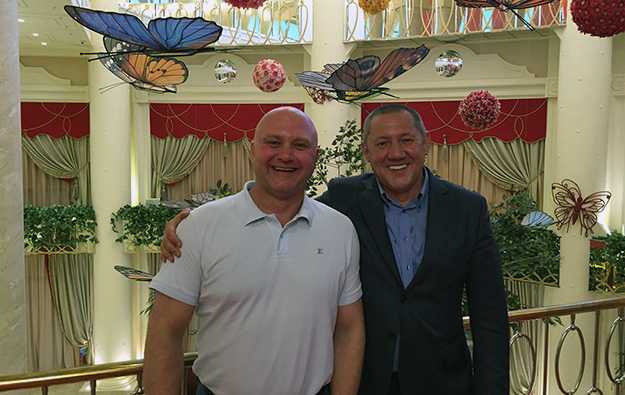 Merkur Gaming has been selected to supply its Avantgarde SLT slot machines to the recent extension of Casino Shambala in Azov City, Russia, the German gaming supplier announced in a press release on Wednesday.

“Our business relations date back to 2014 and since this date we have been in close contact with casino management,” Alexander Moor (pictured, left), international sales manager at Merkur Gaming, said in a statement included in the release.

He added: “The feedback was always positive, but due to insufficient space available on the gaming floor, there were previously no possibilities… to place our machines. The extension has now solved this challenge.”

The release did not disclose how many slot units Merkur Gaming would deploy at Casino Shambala. No financial details of the deal were disclosed.

According to Merkur Gaming, Casino Shambala features 40 gaming tables and more than 800 slots.

In July 2009 the Russian government closed down all the then existing casinos and electronic casino game halls in the country. Subsequently, it identified in 2010 four specific zones in the country that would be allowed to offer casino gaming: Azov City in the Krasnodar region; Primorye near the Pacific port of Vladivostok; Kaliningrad, a Russian exclave on the Baltic Sea coast; and Altai in Siberia. In 2014, Russia’s President Vladimir Putin signed a law allowing the establishment of additional gambling zones in Sochi and in the Crimea.

Earlier this year, the Russian government announced it would be shutting down the Azov City gaming zone by 2019. The reported aim is to concentrate gaming operations in Sochi.

There were three casinos in operation in Azov City, according to media reports.

“We are hopeful that a lot can change between now and then”, Mr Tkach was quoted as saying.

An article in Macau’s draft new gaming law, to create a mechanism to dissolve an existing gaming concession in the event it was not granted a new licence after the current six concessions... END_OF_DOCUMENT_TOKEN_TO_BE_REPLACED