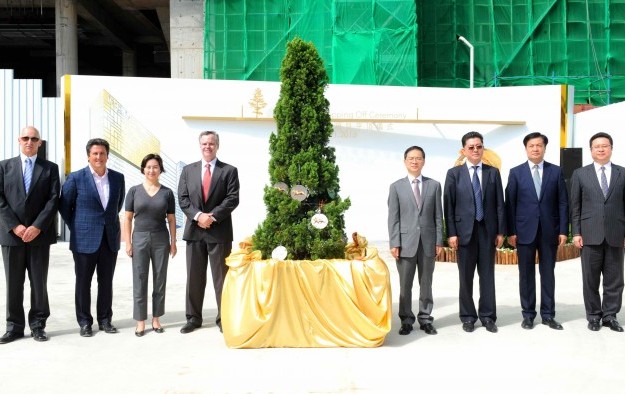 “When we open in 2016, this property will surely be a must-see attraction and a welcomed addition in making Macau a global tourism destination,” said Mr Murren in a prepared statement released to announce the topping out.

MGM Cotai “plans to offer approximately 1,500 hotel rooms and suites”, meeting space, a luxury spa, shops and restaurants, said Friday’s release, adding the property would also have what it described as “the first international ‘Mansion at MGM’” – a branding term used to describe some luxury boutique hotel accommodation within MGM Resorts’ properties in other markets.

MGM China also on Friday gave some details of non-gaming features planned for MGM Cotai. They include what the firm termed its “Spectacle Show”, which will use 23 LED walls in an atrium area, allowing the venue to show huge images with more than 80 megapixels of resolution.

There will additionally be a theatre that can offer 14 different seating arrangements; and Aji, described as Asia’s first “Nikkei cuisine restaurant” offering Peruvian-Japanese cuisine from chef Mitsuharu Tsumura.

An article in Macau’s draft new gaming law, to create a mechanism to dissolve an existing gaming concession in the event it was not granted a new licence after the current six concessions... END_OF_DOCUMENT_TOKEN_TO_BE_REPLACED