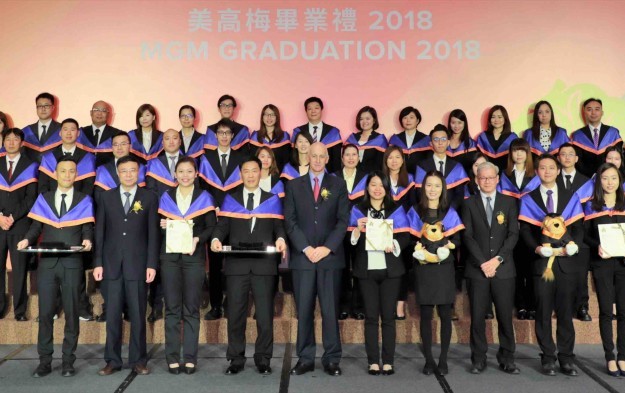 Nearly 900 employees of MGM China Holdings Ltd graduated this week from training programmes put on by the Macau casino operator. A MGM China press release said the company held a graduation ceremony on Thursday at the MGM Cotai casino resort.

Each graduate completed studies via either: the MGM Management Associate Programme; the continuing education programme at the MGM Academy; or with one of Macau’s tertiary or secondary education centres; or via skills training in partnership with the Labour Affairs Bureau, the Macau Federation of Trade Unions and others.

MGM China said it tries to give its employees comprehensive training and chances for personal development so they can fulfil their potential. Last year the company offered more than 200 training courses,delivering an aggregate of about 569,000 hours of training across its more than 10,000-strong workforce, it added.

In the Macau government’s policy address for 2018, delivered last November, the city’s Chief Executive Fernando Chui Sai On, said the authorities wanted to increase the share of locals working in middle- and upper-level management positions in the city’s casino industry to at least 85 percent by 2020.

Since opening in 2007, MGM China has offered more than MOP5.1 million (US$631,600) in scholarships and sponsorships, it says. Mr Bowie stated his company would continue to contribute to Macau’s performance as a hub for tourism business education and training serving the Guangdong-Hong Kong-Macau Greater Bay Area. The latter is a recent initiative of China’s central government to promote coordination and integration of economic and infrastructure development among major cities around the Pearl River Delta.

MGM China recorded net revenue of US$561.4 million for the second quarter of 2018, 32.4 percent up compared to the same period last year. The figures included the contribution of the company’s second Macau property, MGM Cotai, that commenced operations in February.