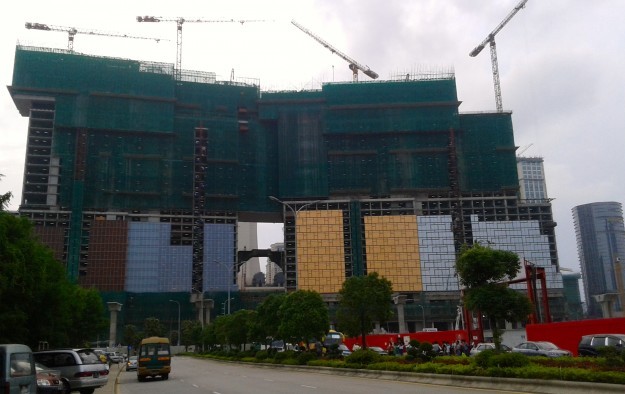 There are likely to be “more losers than winners in the medium term” among Macau’s gaming operators as the new Cotai resorts open in a challenging market, said a report on Thursday from Deutsche Bank Securities Inc in New York.

“Based on our analysis and most importantly our market GGR [gross gaming revenue] forecast, which doesn’t subscribe to the ‘If you build it they will come’ mantra, we believe there are more losers than winners in the medium term with the Cotai pipeline build out,” said analysts Carlo Santarelli and Danny Valoy. They noted that there is roughly US$16.8 billion in large-scale casino capital expenditure at present in Macau, plus US$1.6 billion of project capital in several smaller projects.

“We believe [Macau] GGR needs to be 120 basis points better than our current estimate in 2015″ – a decline of 32.9 percent versus Deutsche Bank’s forecast of a GGR fall of 34.1 percent – merely to offset the fixed cost increases related to Galaxy Macau Phase 2 and Macau Studio City,  wrote the two analysts.

At the level mentioned, any decline in industry EBITDA (earnings before interest, taxation, depreciation and amortisation) in Macau would be purely related with the “GGR decline plus negative operating leverage”, and not fixed costs incurred with the opening of new properties, said the bank.

But brokerage Sanford C. Bernstein Ltd in Hong Kong said in a note on Friday that it thought Melco Crown was in a good position to capture “outsized share” in the premium mass gambling segment due to the way it had honed such operations at its existing Cotai flagship property, City of Dreams, also known within the industry as CoD. ‘Premium mass’ is a reference to a Macau customer segment mainly playing table games for higher stakes but in cash rather than on credit, and normally at lower minimum bets than VIP punters.

The US$2.7-billion Parisian Macao, from Sands China Ltd, is “probably going to have an opening in about 12 months,” said a senior executive of the developer’s parent Las Vegas Sands Corp during its second quarter earnings call in late July.

SJM Holdings Ltd, the casino operator founded by Stanley Ho Hung Sun, in February said it expects construction of the approximately HKD30-billion Lisboa Palace on Cotai “to be completed in the fourth quarter of 2017”.

Deutsche Bank noted in its Thursday report that currently in Macau what it termed the “major”casino properties account for roughly 98.5 percent of total market GGR.

Paradise Co Ltd, an operator of foreigner-only casinos in South Korea, reported casino revenue of nearly KRW48.65 billion (US$39.8 million) for January 2023, according to a Thursday filing to the... END_OF_DOCUMENT_TOKEN_TO_BE_REPLACED