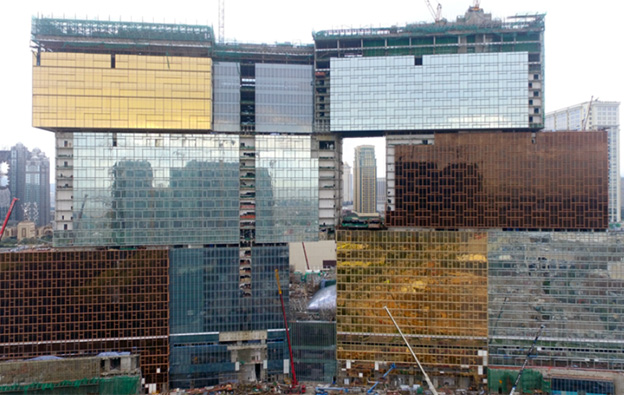 The estimate, presented by analyst John DeCree in a Wednesday note, is based on projected operations spanning three consecutive quarters of the calendar year.

MGM Cotai (pictured) is scheduled to open in the first quarter of 2017, according to an announcement in February.

But there is a “possibility” that the opening of MGM Cotai might “trickle into the second quarter” of 2017, said a June 17 note from brokerage Sanford C. Bernstein Ltd.

U.S.–based MGM Resorts International owns 51 percent of Hong Kong-listed MGM China Holdings Ltd, the developer of MGM Cotai. The scheduled opening of MGM Cotai in the first quarter of 2017 was reiterated at the June 16 event.

Fitch Ratings Inc stated in a May note it expected MGM China to generate about US$600 million in EBITDA in 2017. The figure “factors in about US$200 million EBITDA at MGM Cotai and approximately 20 percent EBITDA decline at MGM Macau,” the credit ratings agency said at the time.

MGM Macau is MGM China’s only casino currently in operation.

“For [MGM Cotai's] first full year of operations (2018) we are estimating US$386 million of adjusted property EBITDA,” Mr DeCree stated in his note on Wednesday.

MGM Cotai was previously slated for a fourth-quarter 2016 launch. The construction budget for MGM Cotai has been described as HKD24 billion (US$3.1 billion), excluding land costs and capitalised interest.

Paradise Co Ltd, an operator of foreigner-only casinos in South Korea, reported casino revenue of nearly KRW48.65 billion (US$39.8 million) for January 2023, according to a Thursday filing to the... END_OF_DOCUMENT_TOKEN_TO_BE_REPLACED