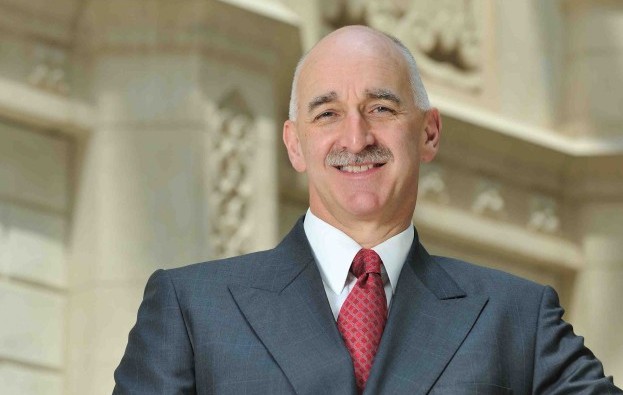 Investment analysts are reporting that phase one of MGM Cotai could now open in “mid-to-late-2016” and not “early 2016” as Macau casino operator MGM China Holdings Ltd had said prior to its first half results announcement on Tuesday.

That day, Jim Murren, the chairman and chief executive of MGM Resorts International, the parent company to MGM China, said the firms had “broadened” the language on the opening date of MGM Cotai, referring only to an “opening in 2016”, a fact confirmed in an MGM China filing in Hong Kong.

Mr Murren referred during a second quarter earnings conference call on Tuesday to “uncertainty” in the future permit process for the project.

On Wednesday, Grant Bowie (pictured), chief executive of MGM China, declined to confirm to GGRAsia the timeframe mentioned by analysts for the first-phase opening of the US$2.9 billion resort. But he did clarify the issue of government permits.

“We have all the permits we need to continue the construction process, but clearly as a general observation…the ongoing process of getting all the subsequent approvals – for everybody – is still something that we will have to address,” he told us.

One of MGM China’s market rivals in Macau, Sands China Ltd, said in its second quarter earnings conference call that construction at its latest project – the US$2.7 billion Parisian Macao on Cotai – had been halted pending “certain approvals from the Macau government”.

MGM China’s Mr Bowie told GGRAsia, and referring to the supervising government department for such projects – the Land, Public Works and Transport Bureau – also known as DSSOPT: “Given the volume of work [in the market], DSSOPT are going through everyone’s documentation to make sure it is in accordance with the process. We understand what the processes are, we will follow those processes, and we will have all of our permitting.”

Kenneth Fong, of Credit Suisse AG in Hong Kong, said in a note on Wednesday: “MGM Cotai is on track and set to open mid-2016. Currently 1,200 construction workers are working on the site, and the superstructure of the basement, which is three floors underground, is about to be completed and the construction is set to move on to the hotel pillar.”

Christopher Jones of Telsey Advisory Group in New York said in a note on Tuesday: “Although MGM [Cotai] could still open in 1Q16, we think a mid-to-late-2016 opening is more likely now.”

Macau’s casino gross gaming revenue (GGR) for the first five days of February is estimated at MOP1.9 billion (US$235.1 million) – or MOP380 million per day – a level that suggests a “45... END_OF_DOCUMENT_TOKEN_TO_BE_REPLACED