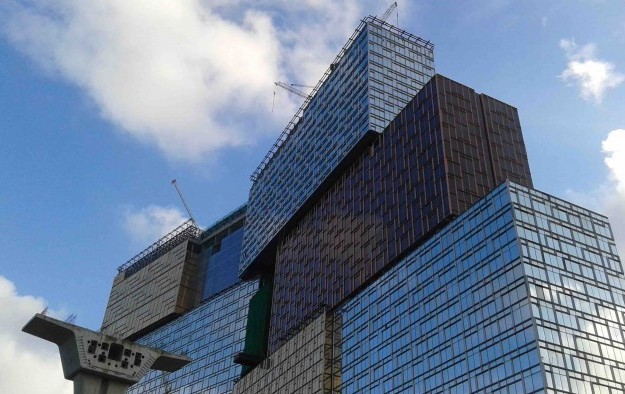 The opening of MGM Cotai (pictured), a new casino resort in Macau, is now expected to be in the second quarter of 2017, not the first quarter, and the budget has also risen slightly, said Jim Murren, chairman and chief executive of MGM Resorts International, on a second quarter earnings conference call with analysts on Thursday.

“We have decided to push out the opening date a bit for MGM Cotai, into the second quarter of next year; recall that we’ve said, we are [were] looking for March [originally]. This will give us just a little bit more time, it does increase the budget slightly by 1 percent to US$3.1 billion, but we think the time is worth it,” said Mr Murren on the parent’s earnings call.

Grant Bowie, chief executive of MGM China, was asked during the call whether he expected to get as few as 100 new-to-market live-dealer tables for MGM Cotai – the number flagged by Wynn Resorts Ltd as a possibility for its US$4.2-billion Wynn Palace scheme which opens on August 22.

Mr Bowie said it was “premature” to talk about new table allocation for MGM Cotai, but added “we are working hard to make sure that we put everything in place and meet all of their [the Macau government’s] requirements and objectives.”

The government has said that table allocation for new projects – subject to a table cap operated by the authorities there – would be linked to issues including the amount of non-gaming provided by new schemes.

Brokerage Sanford C. Bernstein Ltd had mentioned in a note in June the possibility of the MGM Cotai opening being pushed into the second quarter.

There was some better news for investors as MGM China declared – in a filing to the Hong Kong Stock Exchange after trading hours on Thursday – an interim dividend of HKD0.119 per share, amounting to approximately HKD452.2 million in aggregate. The amount represented “approximately 35 percent of the group’s profit attributable to owners of the company for the six months ended June 30,” said MGM China. The company said such profit decreased by 23.6 percent year-on-year in the first half, to approximately HKD1.30 billion.

On a U.S. Generally Accepted Accounting Principles (GAAP) basis, MGM China’s net revenue fell about 19 percent year-on-year in the second quarter of 2016, to approximately US$452 million, reported the parent company. Adjusted earnings before interest, taxation, depreciation and amortisation (EBITDA) for the Macau unit fell 10 percent, to nearly US$119 million.

MGM China recorded operating income of US$51 million for the period, down 11 percent from the prior-year quarter, said the parent company.

Analyst Cameron McKnight of Wells Fargo Securities LLC said in a note following the results that MGM China’s revenues and EBITDA for the period were respectively 2 percent and 4 percent below market expectations, but added: “We do not expect this to impact the stock”.

David Katz and Brian Davis of Telsey Advisory Group LLC said there had been “lower than expected top line volumes in Macau”.

“The first half of 2016 continued to be a challenging time for the Macau gaming market as a result of the changing conditions that began to take effect from mid-2014,” said the company’s management in its discussion of the results.

MGM China mentioned in its Hong Kong filing that factors affecting the Macau market as a whole had included: the introduction of certain smoking restrictions in casinos implemented in October 2014; and “certain political initiatives” introduced by the Chinese government, including an anti-corruption campaign and currency transfer restrictions.

In Thursday’s filing, MGM China said casino revenue for the first half of 2016 fell 22.4 percent year-on-year, to HKD7.01 billion.

VIP table games turnover slipped 31.1 percent to HKD137.71 billion. There were approximately 10 percent fewer VIP tables at MGM Macau in the first half compared to the prior year period, with 163 such tables as of June 30.

VIP gross table games win – a number inclusive of monies reinvested in the business as sales incentives – was down 35.5 percent year-on-year, at approximately HKD4.23 billion.

“Tightened regulations for gaming promoters – that started in the fourth quarter of 2015 – and a mobile telephone usage ban at gaming tables in the VIP gaming areas starting in May 2016, affected the group’s VIP gaming operations,” said the management.

“In response to the volume decrease since 2015, we worked with our gaming promoters to optimise casino space and enhance table yield,” management noted.

MGM China said that in the mass segment it had made “continuous efforts to invest capital to improve the gaming experience of our high value main floor players by renovating the dedicated exclusive gaming space for their use.”

The number of main floor gaming tables in the first half rose 5.8 percent, to 255.

“All components of gaming revenue in the Macau market were adversely impacted by these changed circumstances as well as the slower economic growth in China,” noted MGM China’s management.

MGM China said in its Hong Kong filing that it had taken firm measures to control costs; including – with effect from December 2015 – moving some back office functions, such as finance, human resources and information technology, over the border to neighbouring Zhuhai in mainland China.

“This operation allows us to mitigate the risk of labour shortage in Macau by tapping into the mainland China talent pool,” noted MGM China, adding it also had plans to run a hospitality marketing operation out of Zhuhai.

“We continue to manage costs and run our operations in a disciplined manner,” said MGM China, adding “since the second quarter of 2015, we realised annualised cost savings on various operating expense items amounting to over HKD420 million, on top of an already efficient operation baseline.”

Net revenue at the parent MGM Resorts – under U.S. GAAP – was US$474.35 million in the second quarter 2016; a near 400 percent rise on the approximately US$97.46 million achieved in the prior-year period.

The improvement was aided from the sale by the group – on April 14 – of the Las Vegas shopping mall Crystals for approximately US$1.1 billion.