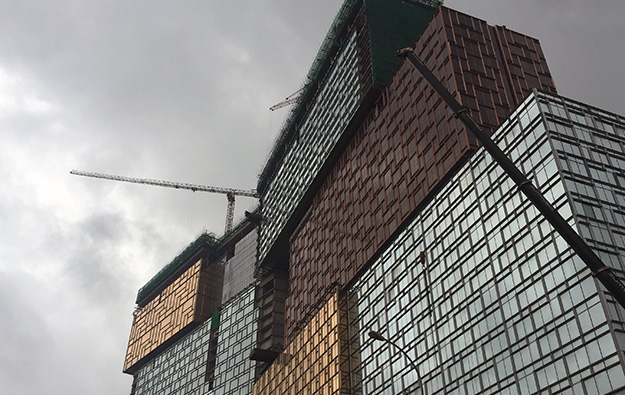 There is a “possibility” that the opening of Macau casino resort MGM Cotai (pictured) might “trickle into the second quarter” of 2017, said a note on Friday from brokerage Sanford C. Bernstein Ltd.

The institution cited comments by management made at an ‘Analyst and Investor Day’ held on Thursday in Las Vegas, Nevada, by MGM Resorts International, the parent investor in MGM Cotai.

MGM Resorts owns 51 percent of MGM China Holdings Ltd, which is developing the under-construction MGM Cotai on Cotai. The property is scheduled to open in the first quarter of 2017, according to an announcement in February, which was reiterated at Thursday’s event. MGM Cotai was previously slated for a fourth-quarter 2016 launch.

“MGM China expects to complete all the government processes by the end of this year and maintains its target date of late first quarter 2017, though there is the possibility that the opening may trickle into the second quarter,” said Friday’s note from Sanford Bernstein analysts Vitaly Umansky, Simon Zhang and Clifford Kurz.

Several new Cotai projects have recently announced some slippage of their opening dates.

U.S.-based Wynn Resorts Ltd and its subsidiary Wynn Macau Ltd have yet to provide a date for when in the third quarter the under-construction Wynn Palace casino resort will open. The US$4.2-billion project was previously scheduled to open on June 25, after a plan to launch it on March 25 was dropped.

The opening of The 13 hotel, located on the Cotai-Coloane border, has been pushed back to the fourth quarter of 2016, from an earlier target of late summer 2016, the project’s promoter announced on June 15.

The 13’s promoter has in the past mentioned plans for a casino at the property. But The 13 Holdings Ltd has made no mention in its more recent releases of gaming facilities at the venue.

Sanford Bernstein said in its note on MGM Resorts’ briefing day – citing MGM China’s chief executive Grant Bowie – that the promoters of MGM Cotai were confident the new round of Cotai hotel openings would not lead to overcapacity in the market.

“Despite an additional 14,000 or so of room inventory that will be added over the next few years, Grant [Bowie] believes Macau is still critically undersupplied in terms of room capacity – especially when we compare Macau’s approximately 30,000 hotel room supply to Las Vegas’ approximately 150,000 rooms,” said Sanford Bernstein.

Mr Bowie had been reported in February as saying that a decision to put back MGM Cotai’s opening to the first quarter 2017 was a “a good decision for Macau”.

Sanford Bernstein’s Friday note quoted Mr Bowie as saying Macau was moving from a “wholesale” to a “retail” market as far as gambling business was concerned.

“MGM China is increasingly focused on customer relationships, transforming from a ‘wholesale market’ where it relies on junkets’ interaction with clients to a ‘retail market’ where MGM interacts with customers directly. MGM claims to already have the highest rated play and largest active customer database in Macau,” stated the brokerage.

The construction budget for MGM Cotai has been described as HKD24 billion (US$3.1 billion), excluding land costs and capitalised interest.

The Macau government announced on Thursday the cancellation of a plan for a nucleic acid test certificate requirement with 48 hour validity, for casino staff, casino customers and official visitors... END_OF_DOCUMENT_TOKEN_TO_BE_REPLACED