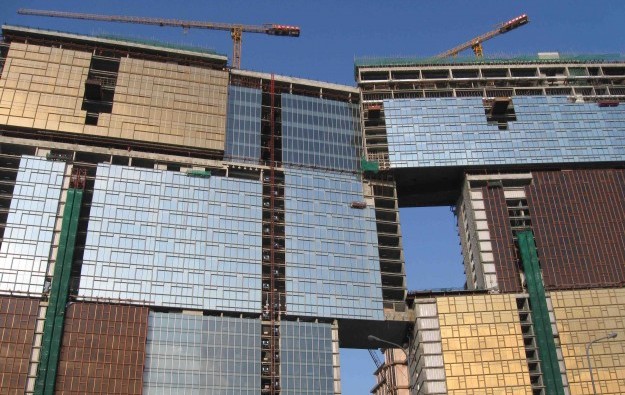 Macau casino operator MGM China Holdings Ltd on Thursday said the opening of its under construction new resort on Cotai (pictured) would be moved to the first quarter of 2017. MGM Cotai was scheduled for a fourth quarter 2016 launch.

“The company has made the strategic decision to move the opening of its MGM Cotai development towards the end of the first quarter of 2017 based on current market conditions and the timing of other resort openings in the area,” MGM China said in a release containing its financial results for 2015.

“We believe the extra time will allow us to further fine-tune our offerings in an evolving marketplace, ensure that we are being as efficient as possible, and ultimately come out with a spectacular end product, offering unique MGM experiences to the market,” the firm said.

“We believe this is the right decision for a healthy launch and long term success of MGM Cotai.”

Construction works on MGM Cotai “progressed with substantial completion of structural concrete and structural steel” during the second half of 2015, the company said. “The majority of all design work has been completed and all work packages have been awarded to fit-out subcontractors,” it added.

The firm plans to spend US$1.6 billion this year to continue the construction of MGM Cotai. About US$75 million of that number is related to MGM Macau, the company added.

MGM China announced this month it had entered into a third supplemental agreement with banks to amend the terms on its HKD23.4-billion (US$3-billion) loan. The casino firm received approval from its lenders to relax conditions attached to the loan financing.

Macau market rival Wynn Macau Ltd in November announced it was delaying the opening of its US$4.1 billion Wynn Palace resort on Cotai by three months. Earlier this month, Wynn Macau chairman Steve Wynn admitted a further delay was “possible”.

“Macau’s secular trend with mass business shifting from peninsula to Cotai, especially with no project openings, poses near-term risk to MGM especially with the opening of Wynn [Palace in] Cotai, until such time as MGM Cotai is open,” said a note from brokerage Sanford C. Bernstein Ltd on Friday.

MGM China posted net revenue of US$499 million for the fourth quarter of 2015, down 31 percent from the prior-year period, according to a Thursday filing from the parent company, MGM Resorts International.

MGM China’s operating loss was US$1.4 billion in the fourth quarter, which included a US$1.5 billion non-cash impairment charge on goodwill recognised in the acquisition of the controlling interest in MGM China in 2011, said the parent company. That compares to operating income of US$109 million a year earlier.

The Las Vegas-based company wrote up MGM China by US$3.5 billion in 2011 in terms of the book value of the asset. The parent said the impairment charge in the fourth quarter last year was due to “market conditions” in Macau, where casino gross gaming revenue (GGR) has fallen for 20 straight months.

The Macau unit reported adjusted earnings before interest, taxation, depreciation and amortisation (EBITDA) of US$131 million for the three months to December 31, a decrease of 29 percent from the prior-year quarter but up 1 percent sequentially.

“Property EBITDA margin grew for [the] third consecutive quarter and reached 29.07 percent, a 2 percent sequential improvement,” said MGM China in its release. “This was due to a combination of our disciplined cost savings efforts and a favourable shift in mix between mass and VIP. Main floor accounted for 81 percent of profit in the fourth quarter.”

VIP revenue accounted for 49 percent of total GGR at MGM Macau in the fourth quarter, “below 50 percent for the first time,” said a note on Friday from Morgan Stanley Research. Mass revenue increased by 12 percent quarter-on-quarter.

“We are seeing some stabilisation in the market led by the mass segment and Macau mass – GGR has shown improvement for two consecutive quarters,” MGM China’s chief executive Grant Bowie said in a conference call following the results announcement.

Group wide, MGM Resorts reported a net loss of US$781.5 million for the final quarter of 2015, a deterioration from the US$342.3 million loss reported a year earlier. Revenue for the three months to December 31 was US$2.19 billion, down 8.1 percent from the prior-year quarter.

In Las Vegas, MGM Resorts achieved 2 percent and 14 percent year-on-year growth in fourth quarter net revenues and EBITDA respectively, “primarily due to the outperformance of our non-luxury Strip resorts in the quarter,” it said.

The casino operator posted a net profit of HKD3.1 billion, a decrease of 45.5 percent from HKD5.7 billion in the previous year. That translated into basic earnings of HKD0.82 per share.

Casino revenue decreased by 33 percent to HKD16.8 billion in 2015 compared to the prior year, the firm said in a filing to the Hong Kong Stock Exchange.

MGM China’s board on Thursday recommended a final dividend of US$46 million, bringing the total 2015 dividend to US$122 million including the interim dividend paid in August. If the final dividend is approved, MGM Resorts will receive US$23 million, equivalent to its 51 percent share in the Macau unit.

The annual dividends are down 82 percent year-on-year, implying 2.7 percent yield, according to Morgan Stanley. “Due to rising gearing, we do not expect dividend growth to resume prior to MGM Cotai opening in the first quarter of 2017,” said analysts Praveen Choudhary, Alex Poon and Thomas Allen.

For the full year 2015, the group’s global net revenues were US$9.2 billion, a 9-percent decrease over 2014, while adjusted property EBITDA increased by 2 percent year-on-year to US$2.5 billion.

“MGM [Resorts] continues to show solid EBITDA growth on modest top line performance, a feature that was lacking in 2014 when operating expenses eroded a bulk of the EBITDA gains,” said a note from analysts Carlo Santarelli and Danny Valoy at Deutsche Bank Securities Inc.

MGM Resorts is also progressing with plans for an initial public offering for MGM Growth Properties LLC this year, a real estate investment trust (REIT) that will be a subsidiary of MGM Resorts. Names of the REIT’s chief executive and chief financial were recently announced by the casino firm.