MGM Cotai still on for 4Q launch despite typhoon: Bowie 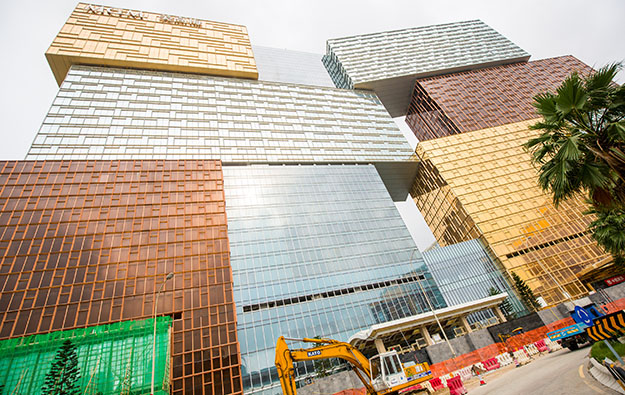 MGM Cotai (pictured), a new HKD26-billion (US$3.32-billion) casino resort under development in Macau, should be able to meet its promoter’s fourth-quarter deadline for opening, despite the disruption wrought on the city by Typhoon Hato, said a senior executive.

Grant Bowie, chief executive of Macau gaming licence holder MGM China Holdings Ltd, told GGRAsia: “We are moving forward. Obviously with the typhoon, it didn’t help us, because of all the issues the government now has to cope with. So we are just trying to work out that our programme’s still holding.”

Intensive clean up work around the city went on for days after the typhoon – the strongest recorded storm in Macau for 53 years – struck Macau on August 23. In the aftermath of the storm, road transport was hampered, as well as movement of material to resupply shops and offices. Only on September 2 was tour business involving groups from mainland China restarted, and several storm-affected casino hotel properties were still closed as of Tuesday.

“This has been a pretty tough event for the whole city – but it seems to be coming back to normality reasonably quickly,” noted MGM China’s Mr Bowie.

That was a reference to a holiday period at the beginning of October marking China’s National Day. The parent company had spoken previously about MGM Cotai opening in the second half of 2017.

Mr Bowie was asked by GGRAsia whether being able to receive required Macau government approvals on aspects of the construction work and the completed parts of the site was a deciding factor in being able to meet the parent firm’s desired launch date.

“That’s one of the things,” he said. “But by and large everybody is just trying to settle back down again.”

Typhoon Hato struck Macau with wind speeds of more than 200 kilometres per hour (124 mph) according to the city’s weather bureau. The arrival of the tropical cyclone caused 10 human fatalities and injured approximately 240 people.

Even before the storm struck, an investment brokerage said in a note that another new Cotai project – the HKD36-billion Grand Lisboa Palace, promoted by SJM Holdings Ltd – was unlikely to meet its second-half 2018 deadline for opening.

The commentary from Sanford C. Bernstein Ltd came after work on Grand Lisboa Palace was suspended by the Macau government for 44 days this summer following the death of a construction worker in mid-June.

Another Cotai casino hotel project, Morpheus – a US$1-billion fifth hotel tower being built at casino resort City of Dreams Macau, a property promoted by Melco Resorts and Entertainment Ltd – had a 13-day work suspension following the death of a worker on July 14.

But Melco Resorts’ chairman Lawrence Ho Yau Lung said in a July 27 call with analysts that the timetable for opening Morpheus had been unaffected by the stoppage. He added the group hoped to open the new hotel in the “first quarter or second quarter next year”.

Melco Resorts had said in an August 25 press release it had temporarily reassigned all 2,000 workers on the Morpheus project to aid the Macau government-led recovery efforts across the territory.