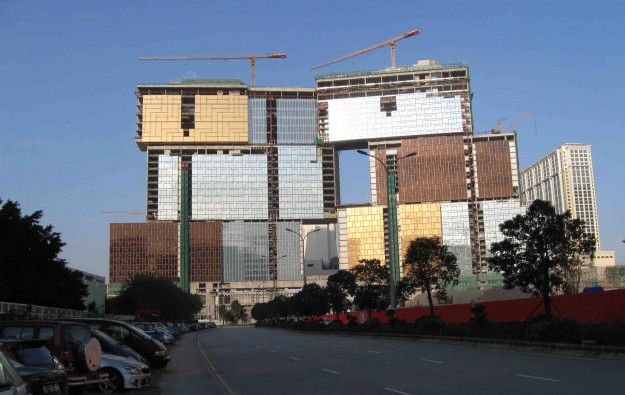 The figure “factors in about US$200 million EBITDA at MGM Cotai and approximately 20 percent EBITDA decline at MGM Macau,” the credit ratings agency said in a Tuesday note.

In the same note, Fitch affirmed its issuer default rating for MGM China at ‘BB’ and for the firm’s senior secured credit facility at ‘BBB-/RR1’, both below investment grade. MGM China’s rating outlook was labelled ‘stable’.

MGM China’s under construction new resort on Cotai (pictured) is scheduled to open in the first quarter of 2017, according to an announcement in February. MGM Cotai was previously slated for a fourth quarter 2016 launch.

MGM China’s only casino currently in operation – MGM Macau – recorded adjusted property EBITDA of US$114.1 million in the first quarter of 2016, down 23.1 percent compared to the prior-year period.

Fitch forecasts a decline of 5 percent in market-wide casino gross gaming revenue (GGR) in Macau for 2016, which assumes “modest” sequential growth in the mass market and “continued, but milder weakness” in the VIP segment.

The credit ratings agency added in its Tuesday note: “We expect a more significant decline in MGM [China]‘s revenues in 2016 after taking into account cannibalisation from the Parisian and Wynn Palace, both scheduled to open in the second half of 2016.”

The US$4.1-billion Wynn Palace casino resort – developed by Wynn Macau Ltd – had been scheduled to open on June 25, after a plan to launch it on March 25 was dropped. But company chairman Steve Wynn in April said the property was likely to only open in August. The company has not yet announced an official opening date for Wynn Palace.

Sands China Ltd’s chairman and chief executive Sheldon Adelson said, on a conference call with investment analysts in April, that his firm was targeting a mid-September opening for the US$2.7-billion Parisian Macao.

Past 2016, Fitch expects “mid-single-digit” GGR growth in Macau “led by China’s rising middle class, the new capacity in Macau and infrastructure projects in and around Macau”, which will positively impact MGM China’s earnings.

Some Macau casinos visited by GGRAsia on Thursday, actually had tables that were closed, notwithstanding strong consumer demand during Chinese New Year (CNY). The reasons for some tables being... END_OF_DOCUMENT_TOKEN_TO_BE_REPLACED