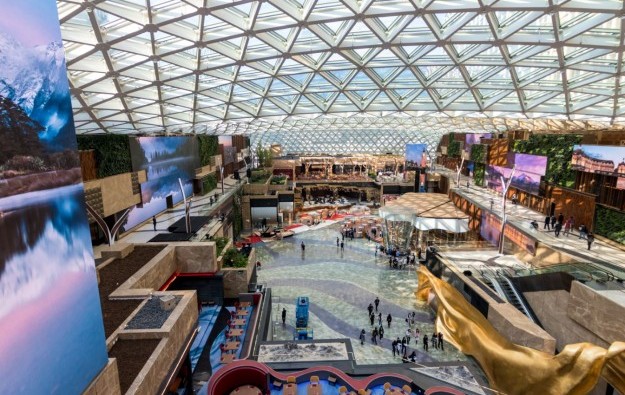 The MGM Cotai casino resort (pictured) is staging a trio of art-related events that draw on the intangible cultural heritage of Macau and mainland China. Like other casino operators in Macau, MGM China Holdings Ltd is endeavouring to offer tourist attractions other than gambling, and the MGM Cotai is using its collection of 300 works of art for the purpose.

The MGM Cotai says it has already begun offering guided tours of an exhibition of 28 silk and metal-thread carpets that belonged to emperors of China. Only 300 such carpets are known to remain in existence.

The exhibition runs until December 31 in the Emerald Lobby of the MGM Cotai.

In a second exhibition by the casino resort, Explore the Beauty of Chinese Embroidery will show examples of craftsmanship as shown in the Chinese television drama, “The Story of Yanxi Palace”. The programme shows Chinese traditional embroidery, Kunqu opera and Ronghua velvet flowers. On display will be costumes worn by Chinese emperors and their consorts. The exhibition opens on Friday and runs until December 9 in the Emerald Lobby.

Pansy Ho Chiu King, the co-chairperson and executive director of MGM China, is on record as saying Macau’s non-gaming attractions are world-class.

“We are building the non-gaming facilities to international standard. At times, I would say, a lot of people when they come, they marvel at the achievements of all of these efforts from the gaming concessions,” she said last month at a press conference to publicise the Global Tourism Economy Forum 2018.

A casino cruise brand reportedly controlled by Malaysian entrepreneur Lim Kok Thay is to launch services from Singapore fewer than five months after the Lim family-founded Dream Cruises brand of the... END_OF_DOCUMENT_TOKEN_TO_BE_REPLACED