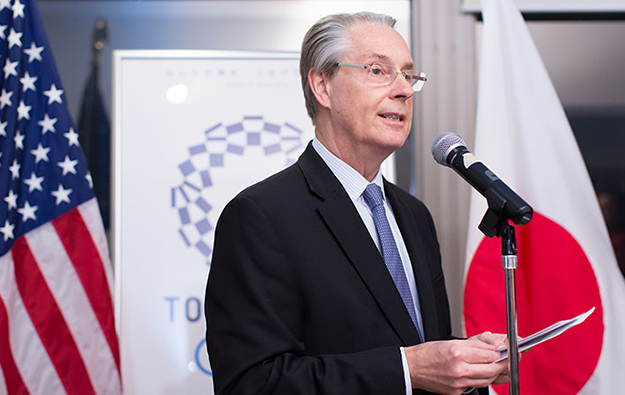 Mr Hyland (pictured in a file photo) is a former charge d’affaires and deputy chief of mission at the U.S. embassy in Japan’s capital city, Tokyo.

“In addition, MGM [Resorts] will allocate development specialists from the U.S. to Japan as it increases its total development staffing in the U.S. and Japan combined to more than a dozen, reinforcing MGM Resorts Japan’s organisational structure as it works to realise a Japanese resort,” the casino operator said in a Tuesday press release.

The document added that MGM Resorts Japan would relocate its Tokyo office from Akasaka to Otemachi, with the new office set to open on September 1. MGM Resorts stated it also planned to open a new office in Osaka “in the future”.

Commenting on the appointment of Mr Hyland, MGM Resorts’ chairman and chief executive James Murren said in a statement included in Tuesday’s release: “Jason’s substantial experience as senior diplomat, his deep understanding of the Japanese culture, as well as his proven leadership and negotiation skills, extensive network and strong command of the Japanese language will be a tremendous asset as we promote activities in Japan.”

MGM Resorts already had announced last month the appointment of a former aide to the U.S. diplomatic mission in Japan as vice president of global industry affairs. Debra DeShong will lead the firm’s global hospitality and entertainment media relations and “messaging strategies”, the company stated at the time.

Also quoted in Tuesday’s release, the chief executive of MGM Resorts Japan, Ed Bowers, said that the firm’s decision to open a new office in Tokyo and to expand its Japan team reflected the company’s “strong commitment” to the Japanese market. “The new office will become our core hub as our team advances toward the realisation of a resort that is uniquely Japanese,” Mr Bowers added.

MGM Resorts first established offices in Tokyo and Osaka in 2014.

“MGM Resorts Japan has been providing information on integrated resorts (IR) to government, industry and private entities, and will continue to build relationships and gather information on the domestic market,” the firm stated in the release.

In a presentation in 2014, MGM Resorts said it planned to bring together “a consortium of leading Japanese companies” for an eventual casino resort in Japan. Mr Murren said in February this year that a potential US$10-billion price tag on a Japan casino resort was “a good number to use” at that point in time.

MGM Resorts had declared itself a candidate for a Japanese casino gaming licence long before lawmakers in that country passed in December last year a bill to legalise such business. After approval of the enabling bill legalising integrated resorts at the conceptual level, a second piece of legislation – the IR Implementation Bill – has now to be passed, detailing the specifics, including how casinos are administered and regulated.

Brokerage Nomura said in a report issued last week that a Japanese casino industry with “two major integrated resorts” could eventually generate gross gaming revenue of US$7 billion per year.

The decision by the Macau government to grant fresh 10-year licences to each of the city’s six incumbent casino operators has been welcome by top management at those firms. Each of the concessions... END_OF_DOCUMENT_TOKEN_TO_BE_REPLACED