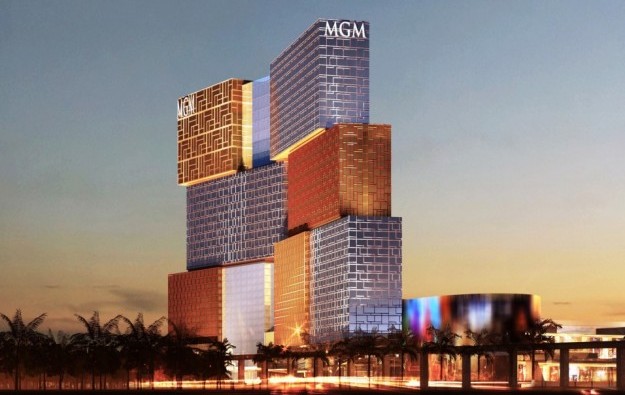 MGM Resorts International and its 51-percent owned subsidiary MGM China Holdings Ltd are no longer telling investors that they expect to open their new Macau casino resort MGM Cotai (pictured in an artist’s rendering) in “early 2016”.

Instead, in MGM China’s first half results filed with the Hong Kong Stock Exchange on Tuesday, the local unit states simply: “We remain on track for the opening in 2016.”

In its 2013 results filed in February, MGM China referred explicitly to being “…on track for an early 2016 opening.”

The firm did confirm on Tuesday however that the capital cost for MGM Cotai – excluding land costs and capitalised interest – was stable at US$2.9 billion. MGM China had announced that number in its 2013 annual result filed in February, which it said was an approximately US$387 million increase on previous estimates.

Senior management at the two firms were asked about the opening date during MGM Resorts’ second quarter earnings conference call on Tuesday with investment analysts.

Jim Murren, chairman and chief executive of MGM Resorts, said: “…the issue with the timing and the problem with clarity is that – and we’re all faced with this – is that the permitting process is so uncertain as to future permits. There is such a backlog because there’s so many towers, so many cranes, so many projects under way right now in Macau that I don’t think anyone can, with any kind of precision, tell you exactly when they’re going to open. They may say so, but they really don’t know. I can tell you that because after spending a couple of weeks there, they just don’t know.”

One of MGM China’s market rivals in Macau, Sands China Ltd, said in its second quarter earnings conference call that construction at the US$2.7 billion Parisian Macao had been halted pending “certain approvals from the Macau government”.

GGRAsia has made several requests to Macau’s Land, Public Works and Transport Bureau – the government body responsible for overseeing and granting permits on such large infrastructure projects – as to the reasons for the halt on the Parisian, but has received no response so far.

Sands China has said that despite its delay, there are no changes to the original schedule. The property is slated to open by late 2015, the company confirmed in a regulatory filing.

MGM Resorts’ Mr Murren indicated on Tuesday that MGM China had received “critical” permits for its work, and had a capable main contractor in China State Construction Engineering Corp Ltd.

He stated: “Labour is always going to be one of the inhibiting factors. We feel that we have the right contractor to get the right kind of labour for the project, and we have received very critical permits, like the superstructure, like the MEP [mechanical, electrical and plumbing], which is a differentiator for us and very important. And so we feel like we’re going to be able to continue to plough through and build this at a very rapid pace. But no one knows for sure exactly to the month or certainly not the day when you can open.”

For these reasons, said the MGM Resorts CEO, the company had “broadened” its language regarding the opening date.

The Macau market is currently facing a number of headwinds. They include labour shortages and several consecutive months of year-on-year contraction in gross gaming revenue from high rollers – attributed to politics in the main feeder market of mainland China.

Grant Bowie, chief executive of MGM China, confirmed that the firm’s Macau VIP turnover had decreased 10 percent year-on-year in the second quarter. He said: “I think there’s a whole series of issues going on that we’re well aware, and in China that has taken some of the energy out of the sector and I think we just see that continued consolidation.”

His boss Mr Murren indicated that the parent had picked up some fresh business from China in Las Vegas. “…There’s no doubt that we’re getting more high-end business here in Las Vegas as a result of our increased visibility in Macau,” he stated.

Mr Murren also gave some other positive news for investors by talking for the first time about phase two of MGM Cotai. He said it would include an additional tower with “several hundred hotel rooms and more entertainment”. The budget would be announced in the next quarter, said the group CEO.

The first phase will have “up to 1,600 hotel rooms, 500 gaming tables and 2,500 slot machines,” according to an MGM China filing on Tuesday, although the final table numbers are subject to variables including approval by the Macau government.

China has moved one step closer towards reopening, by relaxing some its Covid-19 control measures, with most infected people now able to quarantine at home rather than in state-sanctioned... END_OF_DOCUMENT_TOKEN_TO_BE_REPLACED