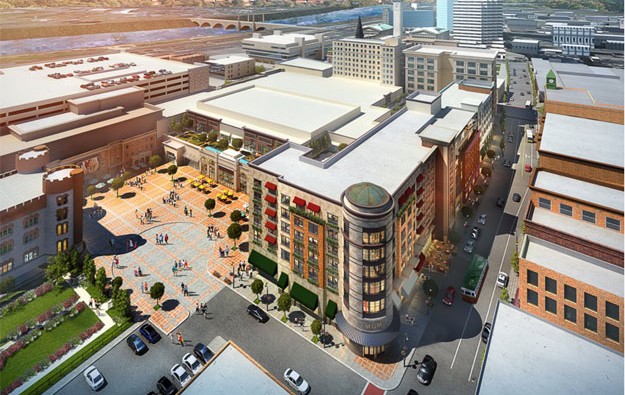 Casino operator MGM Resorts International said its MGM Springfield project (pictured in a rendering) would now cost more than US$950 million. Original estimates were expected to exceed US$860 million, including capitalised interest and land related costs, the firm said in a release on Wednesday.

MGM Resorts, the parent company of Macau-based MGM China Holdings Ltd, broke ground in March on its MGM Springfield project in Massachusetts, in the United States.

The property is scheduled to be completed in August 2018 with the casino due for an official opening in September 2018. The casino resort was originally slated to open in the autumn of 2017, according to earlier statements by the company.

MGM Resorts did a public presentation about how and why the MGM Springfield design has changed over the last four months.

A redesign was made public earlier this year, whereby the hotel at MGM Springfield would be reduced from a 25-storey tower to a six-storey building, and relocated within the site. The new location for the hotel had originally been earmarked for apartments to be marketed to the public, but such real estate will now be moved outside the casino footprint, according to MGM Resorts.

“We are very proud of MGM Springfield’s improved design. Our commitment to the City of Springfield, the region, and the Commonwealth has never wavered,” Bill Hornbuckle, president of MGM Resorts, said in a statement.

MGM Resorts is scheduled to present a comprehensive cost and design analysis to the Massachusetts Gaming Commission on December 3. The new plan must still get approval from local authorities before moving forward with the design approval process, the firm said.

The imminent return of package tours from mainland China will not only help boost Macau’s tourism businesses, but is also expected to help casinos gain more foot traffic in their mass gaming... END_OF_DOCUMENT_TOKEN_TO_BE_REPLACED