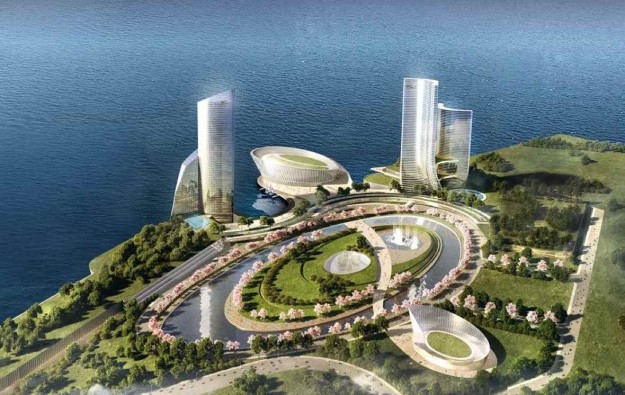 MGM Resorts International on Thursday unveiled several details of its plans for Japan if casino gambling is legalised there.

MGM Resorts president Bill Hornbuckle was the man in charge of that task, during a presentation delivered at the Mizuho Investment Conference, in Tokyo.

According to a copy of the document, available on MGM Resorts’ institutional website, MGM Resorts plans to bring together “a consortium of leading Japanese companies” for an eventual casino resort in Japan.

That would be a similar strategy to the one it followed in Macau, where the company operates in joint venture with local businesswoman Pansy Ho Chiu King.

The presentation also featured three artist’s impressions of “MGM Osaka” (pictured). MGM Resorts has previously hinted it could have a casino ready in that Japanese city by 2019 if legislation is approved before the end of this year.

Some analysts say Osaka is more likely than Tokyo to welcome Japan’s first casino resort, as the Japanese capital is already busy preparing to host the 2020 Olympics.

The Osaka government is planning to designate Yumeshima, a plot of reclaimed land on Osaka Bay, for a proposed casino resort in the city if casino gambling is legalised in the country.

Other international gaming operators interested in investing in Japan also have Osaka in their sights. Representatives from Melco Crown Entertainment Ltd in July met with authorities from Osaka, to discuss building a casino resort in the city.

The results of an online survey released in July by Japanese advertisement and public relations agency Hakuhodo Inc show Osaka was considered by respondents the third most attractive location for a casino resort in Japan. Hakuhodo forecast that a casino resort in the city could attract around 13 million domestic visitors a year, generating sales of JPY1.9 trillion (US$18.0 billion), excluding shopping spending.

The Cabinet Committee of Japan’s lower parliamentary chamber started discussions in June on the enabling bill. However, the Japanese parliament is currently in recess.

In a note obtained by GGRAsia of the main topics already discussed by the cabinet committee, lawmakers give the clearest indication yet that they are interested in having foreign gaming operators involved in casino resorts.

Japanese Prime Minister Shinzo Abe has said his party will seek to pass the enabling law to legalise casinos in the next session of parliament. In July, the Japanese government announced plans to set up a new body that could help speed up the process of opening the first casino resorts in Japan in time for the 2020 Olympics.

The MGM Resorts presentation stated several benefits to Japan from legalising casino resorts. Those include generating “significant” tax revenues and an increase in international and domestic tourism.

The presentation said opening casino resorts could bring an additional five million international tourists to Japan in 2025, on top of the official goal of 25 million.

One other benefit listed was to “deliver on key macro and micro government policy objectives”. Those included helping to “export Japanese culture”, boost infrastructure investment and spur development in areas surrounding casino resorts.

Prime Minister Mr Abe has promised to return Japan to sustained economic growth through his “Abenomics” programme. But after a promising start, Japan’s gross domestic product shrank by 6.8 percent in the three months to June 30. Advocates of legalising casinos in Japan say the gaming industry could provide a much needed push to the country’s economy.

MGM Resorts’ presentation also said casino resorts could provide support to Mr Abe’s “Womenomics” policy. The policy aims to bring more women into the workforce by boosting gender equality in the workplace and offering females up to 30 percent of leadership positions both in the private and public sectors by 2020 – a bold move in a still very socially conservative country.

Mr Hornbuckle’s presentation mostly focused on the business model of casino resorts in Las Vegas. He noted that the share of non-gaming revenue to overall revenue in the firm’s Las Vegas properties stood at 69 percent, with entertainment accounting for 10 percent.

Macau casino operator MGM China Holdings Ltd had a “record” market share in January, and its venues were the “highest-earning businesses” in the portfolio of the majority owner MGM Resorts... END_OF_DOCUMENT_TOKEN_TO_BE_REPLACED