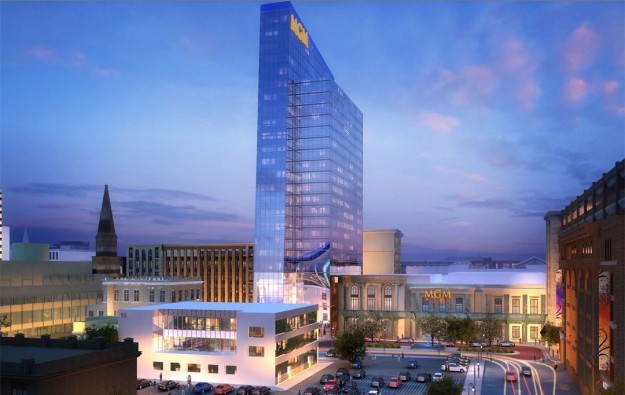 Las Vegas-based MGM Resorts International wants to delay the opening of its planned casino resort in Massachusetts, in the United States, by a year because of a major highway project nearby, reported the Associated Press news agency.

According to the media outlet, the casino operator submitted a revised project schedule last week to Massachusetts’ gambling regulators requesting for construction of MGM Springfield (pictured in a rendering) to be completed in August 2018 and the casino to officially open on September 5, 2018, when the highway work is expected to be done.

MGM Resorts – which controls 51 percent of Macau-based casino operator MGM China Holdings Ltd – broke ground in March on its MGM Springfield project. The US$800-million casino resort was slated to open in the autumn of 2017.

“At this point, we want to make sure we open the best way we can,” Michael Mathis, president of MGM Springfield, told the Massachusetts Gaming Commission, according to the Associated Press. “The industry is littered with many examples of companies that made the wrong decisions for opening. Those are long-lasting decisions that take a long time to recover from. In a very competitive environment, we may lose some of these customers, frankly, forever,” he reportedly added.

Mr Mathis was quoted saying the casino’s revised timetable could be moved forward if the highway project finishes sooner.

MGM Springfield is expected to generate 3,000 jobs and US$25 million annually in public revenue for the Springfield community. The decision to delay the opening might require amending a financial compensation agreement with the local community, the news agency additionally reported. MGM Resorts proposed paying Springfield an additional US$4 million by autumn of 2017 on top of meeting its other financial commitments, added the media outlet.

U.S.-based Wynn Resorts Ltd – the parent of Macau gaming operator Wynn Macau Ltd – also has plans for a new casino property in Massachusetts. It plans to build a US$1.6 billion casino resort, with more than 600 hotel rooms, near Boston.