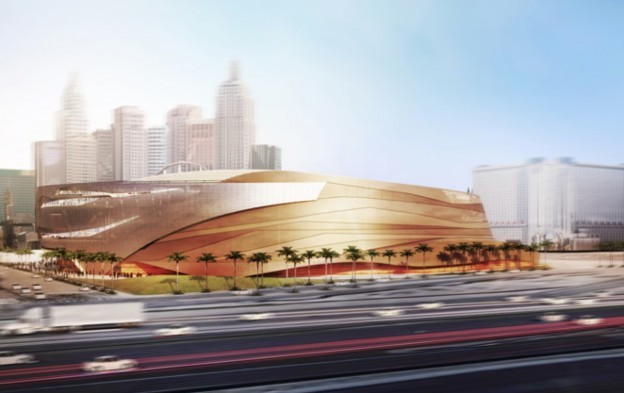 MGM Resorts International and Anschutz Entertainment Group Inc (AEG) on Wednesday announced a US$200 million bank facility to fund the development and construction of the 20,000-seat Las Vegas Arena (pictured in a rendering).

Located on the west side of the Las Vegas Strip, between MGM Resorts’ Monte Carlo and New York New York properties, the new US$375 million arena is scheduled to debut in the spring of 2016.

“While construction is progressing on site, our industry-leading entertainment teams are working behind the scenes, already seeking out and developing new and expanded events to fill this new stage,” Jim Murren, chief executive of MGM Resorts, said in a statement.

“This entertainment programming will carry our city forward for years to come, fortifying Las Vegas as the entertainment capital of the world,” he added.

Las Vegas Arena is jointly owned by AEG and MGM.

“This financing along with the equity contributions of both partners fully funds the development and construction of this new and iconic venue,” said Dan Beckerman, chief executive of AEG.

The arena will be a good complement to the Las Vegas Strip, Union Gaming Research LLC said in a note on Wednesday.

“The arena will include a public plaza and retail centre, and will be built to specifications accommodating multiple sporting events including NBA and NHL games,” wrote analyst Robert Shore.

“We continue to view this as a key component of our Strip recovery thesis, underscored by improving macroeconomics and ongoing deployment of capital into the Las Vegas market,” he added.

Gaming revenue in Nevada declined 3.7 percent year-on-year to US$920.2 million in August. On the Strip, gaming revenue declined 6.1 percent from a year earlier. This was the first decline following three consecutive months of growth, according to official data.

MGM Resorts has one of the biggest development pipelines in the casino industry at about US$5 billion, including the planned US$2.9 billion MGM Cotai in Macau.

Macau casino operator MGM China Holdings Ltd had a “record” market share in January, and its venues were the “highest-earning businesses” in the portfolio of the majority owner MGM Resorts... END_OF_DOCUMENT_TOKEN_TO_BE_REPLACED