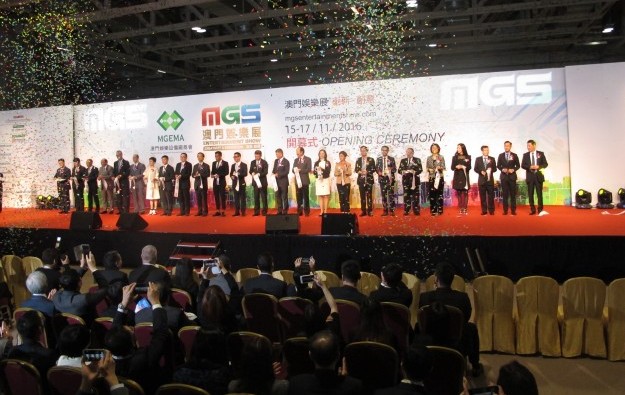 The fourth edition of the annual Macao Gaming Show started today (Tuesday) at the Venetian Macao casino resort, in Macau’s Cotai district. The trade exhibition and conference is focused on the Asian gaming industry and ends on Thursday.

The show is organised by the Macau Gaming Equipment Manufacturers Association. Association chairman Jay Chun told GGRAsia on the sidelines of the opening ceremony that the number of exhibitors at this year’s event had increased by 20 percent compared to 2015, to a total of 195 exhibitors.

“I think we will be able to bring more buyers to the show and also display a greater number of new products,” Mr Chun said.

This year’s edition of the Macao Gaming Show has been branded ‘MGS Entertainment Show – Creativity and Innovation’. When the event was launched in 2013 it was conceived principally as a casino industry trade exhibition and conference.

Mr Chun said the branding revamp – aimed at introducing more non-gaming elements to the show – had proven successful, as shown by the increase in the number of exhibitors. He added that the new format would continue in next year’s edition.

Exhibitors from the gaming industry at the 2016 Macao Gaming Show include: gaming equipment and accessory makers and sellers; gaming promoters (also known as junkets); and suppliers of casino fixtures and fittings.

The conference portion of the event covers several panels discussing the future of gaming in Asia, including the potential legalisation of casino gambling in Japan. There will also be panels discussing the latest developments in regional lottery markets and the use of new technologies to create new gaming markets.

Macau casino operator Galaxy Entertainment Group Ltd said in a Wednesday statement, in response to GGRAsia’s enquiry, that “there are no gaming promoters currently operating at Galaxy... END_OF_DOCUMENT_TOKEN_TO_BE_REPLACED