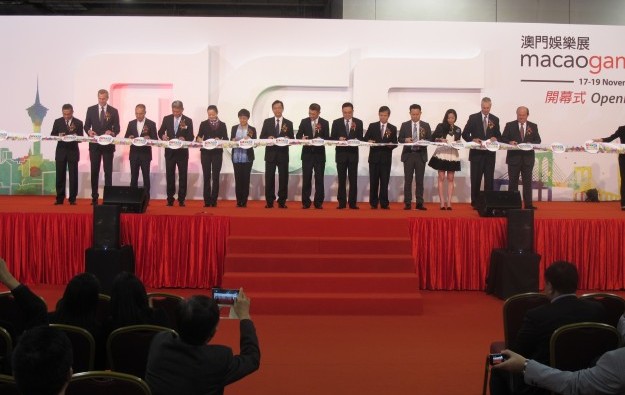 The 2015 edition of the Macao Gaming Show opened this morning at casino resort Venetian Macao, on Cotai. This year, the event is emphasising the role of non-gaming products in the overall appeal of the industry.

The Macao Gaming Show– comprised of a trade show and conference – is organised by the Macau Gaming Equipment Manufacturers Association. The event runs until Thursday afternoon.

“While developing our gaming industry, we shall not put other industries aside,” said Gina Lei, president of the organising committee, in a speech during the opening ceremony (pictured).

A number of gaming industry analysts have noted that the Macau government wants to shift the city’s tourism focus to mass-market entertainment – especially non-gaming varieties. Local authorities have stated that the number of new-to-market live gaming tables granted to each of the several casino resorts under construction on Cotai will depend on the non-gaming attractions offered by those venues.

This year’s Macao Gaming Show covers more than 10,000 square metres (107,639 sq feet). The organisers did not disclose the number of participating exhibitors. The 2014 edition of the trade show attracted a total of 146 exhibitors from 20 countries.

While casino suppliers still take up most of the exhibition floor in this year’s edition of the Macao Gaming Show, there are several portions of it dedicated to non-gaming elements, including Macao’s cultural and creative industries. France and South Korea each have a themed area to promote non-gaming products and services from those countries.

Davis Fong Ka Chio, director of the Institute for the Study of Commercial Gaming at University of Macau, says it is important for gaming trade shows in the city to promote economic diversification and non-gaming elements.

“We have been struggling for a long time trying to understand what can be the synergies between the gaming and non-gaming sectors. There is not just one formula,” Mr Fong told GGRAsia on the sidelines of the Macao Gaming Show opening ceremony.

He added: “Operators are now seeking different formulas on how to potentiate the synergies between gaming and non-gaming. [Macao Gaming Show] is a good platform to let people discuss and find a good model for Macau.”

Stocks of Macau casino operators rose substantially in the Hong Kong market on Monday, after the local government announced on Friday a bill proposing a new regulatory system for gaming... END_OF_DOCUMENT_TOKEN_TO_BE_REPLACED