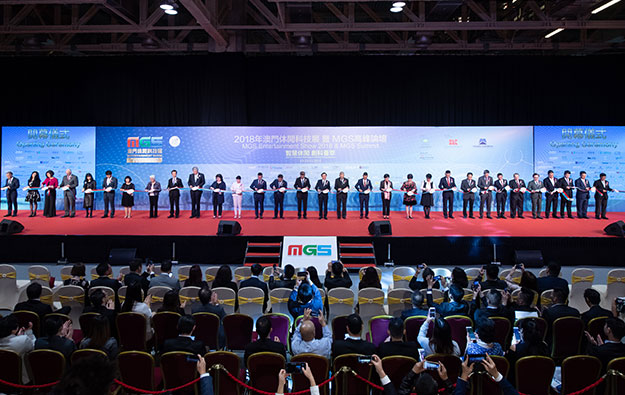 The Macau-produced casino industry trade exhibition and conference known as the MGS Entertainment Show, drew an aggregate of about 200 exhibitors of all types for this year’s edition, said Jay Chun, chairman of its organiser the Macau Gaming Equipment Manufacturers Association (MGEMA).

Mr Chun was speaking to media on the sidelines of the opening ceremony of the trade show. The main event runs from November 13 to 15 at the Cotai Expo at the Venetian Macao casino resort. The event has diversified beyond gaming in recent years.

“For this year, nearly 200 exhibitors have joined our show. Aside from [the display zone of] gaming equipment, we also have culture and technology-themed zones for other types of exhibitors,” Mr Chun said.

The conference portion is covering topics including e-Sports, blockchain technology and intellectual property rights for games, according to the trade show organiser.

Mr Chun also said that the proportion of gaming suppliers to all all show exhibitors was “similar” this year to last year.

Most of the suppliers present had already established businesses in Macau and had participated in previous editions of the event, Mr Chun noted.

Mr Chun said that as far as visitor numbers were concerned: “For the past editions of MGS show, we have about 8,000 to 10,000 visitors [per edition]. We hope that we can at least achieve this level for this year’s edition.”

The annual MGS event, first held in 2013, was originally known as the “Macao Gaming Show”. This year the Chinese version of the show’s name has undergone another renaming exercise. The new moniker translates as the “2018 Macau Leisure Technology Show”.

Macau’s casino gross gaming revenue (GGR) for the first five days of February is estimated at MOP1.9 billion (US$235.1 million) – or MOP380 million per day – a level that suggests a “45... END_OF_DOCUMENT_TOKEN_TO_BE_REPLACED