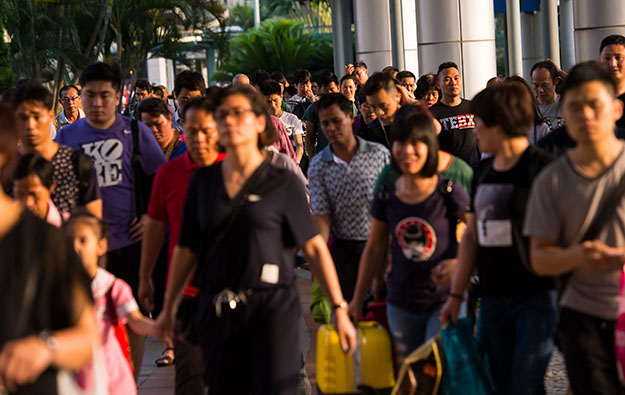 The Macao Government Tourism Office (MGTO) on Friday urged tourists to reconsider any upcoming trips to Macau due to the aftermath of Typhoon Hato.

The tropical cyclone struck Macau on Wednesday morning, with wind speeds of more than 200 kilometres per hour (124 mph) according to the city’s weather bureau. By Friday evening the local death toll from the storm had risen to 10 when the Macau authorities confirmed a man’s body had been found in the basement car park of a building in the Patane district of Macau peninsula. More than 240 people were injured during the typhoon.

“At present, water and power supply has not fully resumed in Macau yet. Some hotels and guesthouses remain affected by power and water shortage,” said the tourism bureau in a press release.

It added: “Furthermore, with damaged facilities and the blockage of some roads after the typhoon, frontline workers and volunteers are facing an immense number of tasks to tackle the aftermath.”

MGTO additionally said it had conducted an emergency meeting with travel industry representatives on Friday morning and requested local travel agencies temporarily suspend their tour group arrangements to Macau from August 25 to 30, “so that more resources can be allocated for the city’s recovery”.

The bureau additionally said it would form a task force with hotels and travel agencies “to discuss the subsequent tasks and related issues following the suspension of tour group arrangements to Macau”.

The tourism bureau stated in a press notice issued on Friday evening that – as of 5.30pm that day – 50 of the 64 local hotels in the three-star to five-star category that it had canvassed, confirmed having power and water. The previous day, only 36 out of 64 establishments approached confirmed they had both utilities, and some of the city’s hotels had suspended guest check-in and check-out at their properties.

MGTO added that it had been scrutinising room prices of local hotels and guesthouses for any signs of what it termed “irregularities”. Rumours had been circulating of some hoteliers asking extremely high prices for rooms with fully-functioning utilities.

The tourism bureau said on Friday that so far it had not discovered any “escalation among room prices from their original amount declared by hotel and guest house establishments to MGTO, while some online booking websites were found to have raised their room prices”.

Huge piles of refuse and flood-spoiled goods from shops and offices were still piled in some of the streets of Macau as of Friday afternoon. Personnel from the People’s Liberation Army Garrison in Macau on Friday joined the clean up operation for Typhoon Hato.

In other developments, Macau casino operator Melco Resorts and Entertainment Ltd said it had reassigned all 2,000 workers on its under-construction Morpheus hotel tower at City of Dreams, to join Macau government-led recovery efforts across the territory. It added they would work through the weekend across the areas of the city worst affected by Typhoon Hato.

Meanwhile, a new tropical depression, named “Pakhar”, is possibly bound for southern Guangdong province, passing close to Macau and Hong Kong. The new storm had strengthened into a tropical storm on Friday, and according to the Hong Kong Observatory it could develop into a severe tropical storm by Sunday. Macau authorities said in a press conference on Friday afternoon that they would raise the storm warning signal No.1 on Saturday.