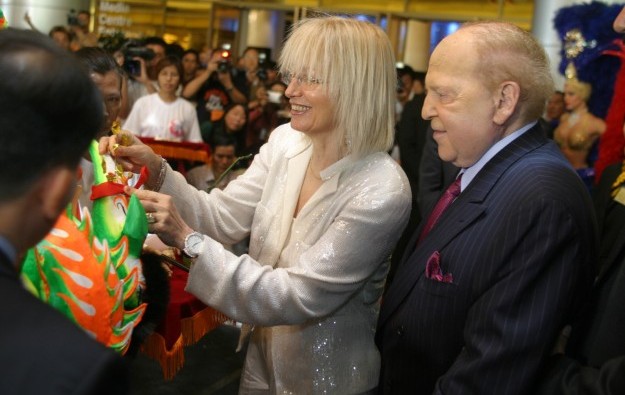 Miriam Adelson (pictured with her late husband, Sheldon Adelson), is at number 50 on the global rich list, with an estimated net worth of US$27.5 billion.

Mr Adelson, who died in January 2021, founded Las Vegas Sands Corp. The United States-based group has casino operations in Macau and Singapore, and in February this year completed the US$6.25-billion sale of its Las Vegas operation and real estate.

But falling out of Forbes’ billionaires  list in 2022 – having been worth US$2.4 billion in 2021 – was Lawrence Ho Yau Lung, chairman and chief executive of casino group Melco Resorts and Entertainment Ltd, which has operations in Macau, the Philippines and Cyprus.

There are 2,668 people featured on Forbes’ 36th-annual ranking of the planet’s richest people. That means 87 fewer than a year ago. Those listed are worth a collective US$12.7 trillion, i.e., down US$400 billion on 2021′s aggregate.

Many of those with riches derived from the Asian casino sector have seen a year-on-year decline in their net worth, linked to a decline in stock prices.

The second gaming name on Forbes’ 2022 global list, at number 166, is Lui Che Woo, chairman of Macau casino operator Galaxy Entertainment Group Ltd, with US$11.6 billion, down from US$19.4 billion last year.

Ports and casino entrepreneur Enrique Razon – chairman of Bloomberry Resorts Corp, promoter of the Solaire Resort and Casino in the Philippine capital, Manila – actually saw his wealth go up year-on-year.

The second-wealthiest Filipino, number 369 globally, Mr Razon saw his wealth rise to US$6.7 billion this year from US$5.0 billion in 2021.

Steve Wynn, a co-founder and former chairman of U.S.-based Wynn Resorts Ltd, which has Macau and Las Vegas, Nevada, operations, is number 913, with US$3.3 billion, up from US$3.2 billion in 2021. Mr Wynn, who left the business in early 2018 after complaints of sexual misconduct – denied by him – sold most of his stock in the firm soon after.

One child and one former consort of the late Macau gambling tycoon Stanley Ho Hung Sun are on the global list.

Pansy Ho Chiu King, a co-chairperson on Macau operator MGM China Holdings Ltd, is at number 951, with US$3.2 billion, from US$4.3 billion a year before.

Her father’s fourth consort, Angela Leong On Kei, an executive director of Macau operator SJM Holdings Ltd, is number 1,096, with US$2.8 billion, compared to US$3.4 billion in 2021.

Henry Sy Jr is number 1,096 this year, with his net worth rising to US$2.8 billion from US$2.7 billion in the previous year. Mr Sy is co-vice chairman of conglomerate SM Investments Ltd, the parent of Belle Mr Corp, an investor in the City of Dreams Manila casino resort in the Philippines.

Also at number 1,096 is Andrew Tan, of Philippine conglomerate Alliance Global Group Inc, parent of one of the investors in the Resorts World Manila casino resort. His worth was US$2.8 billion, down from US$3.0 billion in 2021.

Number 1,196 on the list, is Chen Lip Keong, who heads NagaCorp Ltd, the owner of the NagaWorld casino complex in the Cambodian capital Phnom Penh. His worth went down to US$2.6 billion, from US$4.6 billion the year before.

At number 1,818 in the 2022 list, with US$1.6 billion, from US$1.8 billion last year, is pachinko games and casino equipment entrepreneur Kazuo Okada, from Japan. Mr Okada founded Universal Entertainment Corp and was once a shareholder of Wynn Resorts, but was ousted from both roles amid allegations of business misconduct. He has denied the claims.

Financier Ronald Perelman, once a large investor in casino technology supplier Scientific Games Corp – now Light & Wonder Inc – is at number 1,196, with his wealth declining to US$2.6 billion from US$3.7 billion.

Macau is to create distinct zones on its casino floors and designated gambling chips that will be solely for the use of players from overseas. The moves will be part of a new gaming tax system to... END_OF_DOCUMENT_TOKEN_TO_BE_REPLACED