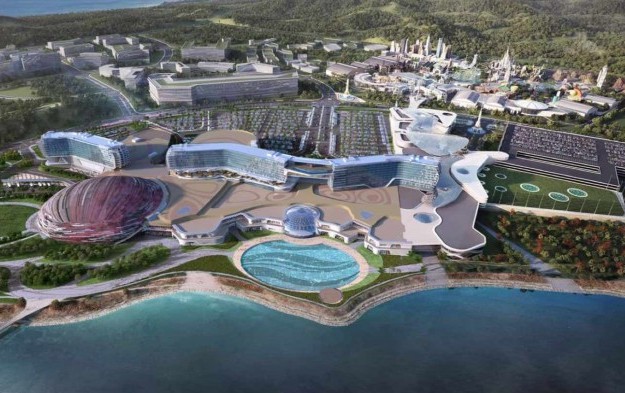 U.S. regional tribal casino operator Mohegan Gaming and Entertainment announced on Thursday a “strategic partnership” with global producer and distributor of filmed entertainment Paramount Pictures Corp for a casino resort Mohegan Gaming is building next to the Incheon International Airport, in South Korea.

Under the agreement, Mohegan Gaming will add a Paramount Pictures-branded theme park at the casino resort it is currently building in South Korea. The property is dubbed Inspire Integrated Entertainment Resort.

The US$5-billion Inspire (pictured in an artist’s rendering) is being developed by stages. On Thursday, the company said that the first stage of the scheme was scheduled to open in 2022, a delay compared to the previously-announced 2021 opening. The firm said in its latest release that it expected to break ground for the Inspire project in May 2019.

In Thursday’s release, Mohegan Gaming said the Paramount-branded theme park will be part of Inspire’s “phase 1B”, scheduled to open in 2025.

“We are proud to have Paramount Pictures join us as a strategic partner in the development of our innovative integrated entertainment resort concept,” said Kevin Brown, chairman of the Mohegan Tribe and of the Mohegan Gaming management board, in a prepared statement.

He added: “With Paramount alongside as we answer the demand of today’s consumers, the Inspire model not only displays our commitment to trend-setting in this industry but also demonstrates the Mohegan Tribe’s commitment to growing South Korea’s travel, tourism and workforce development goals, while securing the generational sustainability of the Mohegan Tribe.”

Kevin Suh, executive vice president for themed entertainment for Paramount, was quoted as saying in the release: “Paramount is proud to announce Korea as one of the first locations for a world-class Paramount branded theme park. Paramount looks forward to its partnership with Inspire and to be part of one of the world’s premiere entertainment destinations at Inspire.”

In October, Mohegan Gaming announced a “multi-year partnership” with concert promoter Live Nation Entertainment for the Inspire project. The casino operator said at the time that the partnership would ensure that “Project Inspire venues attract the very best in global talent and create the region’s most exciting entertainment experience”.

On Thursday, Mohegan Gaming also reported its results for its fiscal fourth quarter ending September 30. The firm said its net income fell 27.2 percent year-on-year, to just over US$37.7 million. The group said in commentary on the numbers: “Consolidated net revenues declined modestly during the quarter, primarily driven by a softer July gaming performance, a challenging year-over-year comparison in gaming revenues at Mohegan Sun in September of 2017, and continued increases in promotional activity in the Mohegan Sun Pocono gaming market.”

Mohegan Gaming added: “These factors, as well as increases in slot taxes assessed by the Commonwealth of Pennsylvania [in the U.S.], contributed to the year-over-year decline in adjusted EBITDA [earnings before interest, taxation, depreciation and amortisation].”

Such adjusted EBITDA was US$75.2 million, down 14 percent on the prior-year period, said the group.

China has moved one step closer towards reopening, by relaxing some its Covid-19 control measures, with most infected people now able to quarantine at home rather than in state-sanctioned... END_OF_DOCUMENT_TOKEN_TO_BE_REPLACED