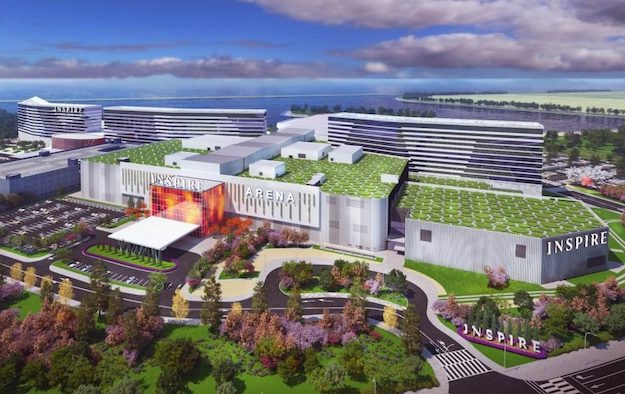 The international president of casino group Mohegan Gaming and Entertainment, Bobby Soper, has told GGRAsia the firm expects to open its South Korea casino project by the “fourth quarter of 2023,” after finalising in November this year the financing for the project.

Mohegan Gaming, currently a tribal casino operator in the United States, is developing the Inspire Entertainment Resort (pictured in a rendering), a complex that will have a foreigner-only casino, near Incheon International Airport, South Korea’s main air hub.

“Phase one [of Inspire] will be completed some time in the fourth quarter of 2023, and it will have significant integrated resort amenities,” stated Mr Soper in an interview with GGRAsia.

That phase will feature three 5-star hotel towers, with an aggregate of 1,200 rooms. As well as the foreigner-only casino, it will also offer a 15,000-seat performance arena, space for conventions, shops, an indoor water park with capacity for 3,000 customers, and a large outdoor area themed the “Family Park”.

In late November, Mohegan Gaming said it had closed the US$1.55 billion financing for phase one of the South Korean project. The funding includes a total of US$575 million in equity, consisting of a US$300 million investment from Mohegan Gaming, and US$275 million raised through global private equity firms. The financing package consists also of a KRW1.04-trillion (about US$890-million) loan, raised via a consortium of three South Korean banks.

In his comments to GGRAsia, Mr Soper conceded that the Covid-19 pandemic had affected Mohegan Gaming’s “ability to finalise” the financing for the Inspire scheme.

“It was more challenging, especially since part of the project financing was in [South] Korea through local Korean banks,” noted the executive. “But we got there, and the first phase of the project is fully capitalised, we are remobilising, and construction has already begun.”

“It is our intention to move relatively quickly on phase two after phase one opens. We have significant land even beyond phase two, and our plan will be done in multiple phases over the next 20 years,” he stated.

Mr Soper said it was “premature to provide an actual schedule” for phase two of the resort, but that the expansion of the property would also include a “significant themed component”.

Macau’s Legislative Assembly (pictured) will conduct on Monday (January 24), during a plenary session, a formal first reading of the draft bill to amend the city’s gaming law, according to a... END_OF_DOCUMENT_TOKEN_TO_BE_REPLACED