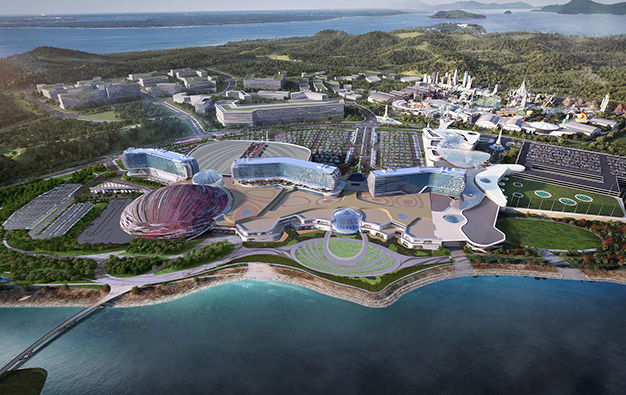 United States-based tribal casino operator Mohegan Gaming and Entertainment says it has appointed Hanwha Corp, one of the country’s largest conglomerates, as the main contractor for a casino resort it is developing in South Korea.

The scheme – known as ‘Inspire’ (pictured in an artist’s rendering) and located in Incheon, near South Korea’s capital Seoul – is on track to open in 2022, said Mario Kontomerkos, Mohegan Gaming’s president and chief executive, in a statement on Thursday.

“Project Inspire in South Korea continues under construction and remains on track for a 2022 opening,” noted Mr Kontomerkos in commentary contained in the group’s fourth fiscal quarter ended September 30.

He added: “In connection with Inspire, we are pleased to announce our partnership with Hanwha Corp, one of the country’s largest conglomerates, who will serve as our primary general contractor and will also provide the project with important local operational expertise and credit enhancement.”

A corporate presentation accompanying the results said Mohegan Gaming had reached a “comprehensive partnership agreement” with Hanwha group for three “key” areas in order to advance the project.

Aside from Hanwha Engineering and Construction being the general contractor, the group has also provided what was described as a “guarantee of completion”, providing US$100 million investment into the project. The group’s Hanwha Hotels and Resorts has also a multi-year agreement to manage non-gaming offerings at the property, including hotel and resort operations, said Mohegan Gaming.

Mohegan Gaming said that Hanwha took over the construction site for Inspire on October 1, following the completion of foundation pile work on September 20.

The first phase of Mohegan Gaming’s casino resort project in Incheon will include a five-star hotel about 1,250 rooms, a 15,000-seat event arena, a convention centre and a foreigner-only casino with 150 gaming tables and 700 slots and electronic gaming machines, according to the presentation deck. Inspire’s initial phase had a budget of KRW1.5 trillion (US$1.26 billion), reported the Korea Times in November.

A total capital commitment of US$5 billion has been mentioned for multiple phases over two decades. According to the Korea Times, the scheme would be developed in four phases, with the final phase to be completed by 2031.

The so-called Phase 1B of Inspire would include a Paramount Pictures-branded indoor theme park, to be developed in partnership with global producer and distributor of filmed entertainment Paramount Pictures Corp. Construction for that phase is to start in 2021, and to be completed by 2025, according to the supporting materials.

On Thursday, Mohegan Gaming said its consolidated net revenues were up 19.2 percent year-on-year, to US$414.0 in the three months to September 30. Adjusted earnings before interest, taxation, depreciation and amortisation stood at US$89.4 million, down 5.4 percent from the prior-year period, driven by lower overall gaming revenues but offset by stronger non-gaming results, said the company.