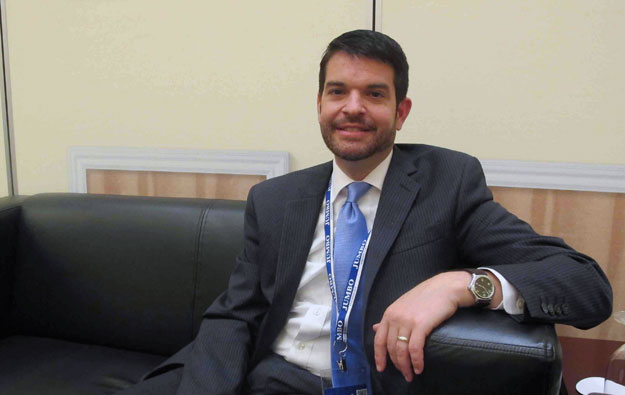 “We’ve signed the lease with the Incheon Airport Authority, which was a big step. We have begun the permitting process. Conceptual design is well under way, we’re moving forward with design for permitting as well as master planning, and that has evolved very well,” said Bobby Soper (pictured), president of Mohegan Sun, in an interview with GGRAsia.

“Our goal remains to break ground next year and open in early 2020,” he said.

Mr Soper said the company expects the process to acquire all the necessary permits “to take 12 to 18 months”, adding that this stage of the project began “late this summer”.

He added: “It will probably be the third or fourth quarter next year that we actually break ground. That’s consistent with what we expected for an opening in early 2020.”

A consortium led by Mohegan Sun had been awarded a casino licence by the South Korean government earlier this year, as part of an integrated resort licence bidding process initiated in 2015. The other consortium partners are South Korean chemicals manufacturer KCC Corp; and Incheon International Airport Corp, the operator of the air hub next door to the project.

The project – Mohegan Sun’s first venture outside of North America – would include a foreigner-only casino; 1,350 hotel rooms; a 15,000-seat arena; a theme park; a medical tourism hub; and restaurants.

The Mohegan Sun president said the recent political turmoil in South Korea should not delay the progress of the venue. Pressure is mounting on South Korean president Park Geun-hye to step down, as authorities have detained and questioned some of her political aides and close allies, as a probe into an alleged corruption scandal in the country spreads.

“Licensing and permitting all occur at the municipal level and for any approvals we need – whether it is through the Ministry of Culture, Sports and Tourism or other ministries – we have not been provided any indication that the current political situation will adversely impact our progress,” said Mr Soper.

Mr Soper said the focus of the South Korean integrated resort would be on non-gaming elements. “We pursue this project understanding it [the casino part] is a foreigner-only project. We programmed it, designed it and built our business model around a foreigner-only casino,” he stated.

He added: “We feel very comfortable, simply because our model contemplates a truly integrated resort driven by significant non-gaming revenues, which will be sustained by not only tourists from China but locals as well.”

Mohegan Sun’s president said the business model for the casino resort was designed to cope with domestic competitors as well as with competitors in other jurisdictions.

Commenting on Paradise City, Mr Soper said: “We actually think that our projects will be complementary. We feel that Incheon will be the gateway to tourism in northern Asia, simply because there’s going to be so much critical mass of development around the airport.”

The executive said the two new Incheon projects are different in nature: “They [Paradise City] are room-, casino-, convention-driven; we are recreation-, entertainment-driven.”

In neighbouring Japan, a bill legalising casino gaming has recently gained momentum – according to some commentators – as a cross-party selection of lawmakers is proposing to debate such a bill in the current extraordinary session of the parliament.

“Because of that, we were very cautious and conservative on what our assumptions were regarding visitation from Japan. We still believe there’s some opportunity but it’s not the primary component of our business model,” the executive explained.

“Once it [casino gaming] is legalised [in Japan], we don’t believe it’s going to impact us based upon on how we developed our business model,” he added.

Mr Soper was speaking to GGRAsia at the Macao Gaming Show 2016. During his presentation at the conference session of the casino industry trade show, the president of Mohegan Sun said the group decided to “spread out internationally because of the market saturation in the United States”.

“Our tribe made the conscious decision that it wanted to be a commercial operator, not just a tribal gaming operator. In large part, it was a diversification initiative,” said the executive.

Mr Soper further stated that the U.S. tribal casino operators are an emerging segment of the industry that “is spreading its wings”.

Another Native American tribe, the Seminole Tribe of Florida – via Seminole HR Holdings LLC and Hard Rock International Inc – has shown interest in bidding for a licence in Japan if casino gaming is legalised there. The group is also part of a consortium that won the right to a casino licence in the Republic of Cyprus.

Mr Soper said he expects to see more U.S. tribal casino operators expanding internationally. “There’s a number of tribes that have been very successful and my guess is that they will try to diversify and spread out,” he said.

“I think we are starting to see recognition [for tribal casino operators] now. It has taken some time to build credibility but it has now been established. With our growth and the Seminoles’ growth, I think you are going to see more of it moving forward,” he added.

Some Macau casinos visited by GGRAsia on Thursday, actually had tables that were closed, notwithstanding strong consumer demand during Chinese New Year (CNY). The reasons for some tables being... END_OF_DOCUMENT_TOKEN_TO_BE_REPLACED