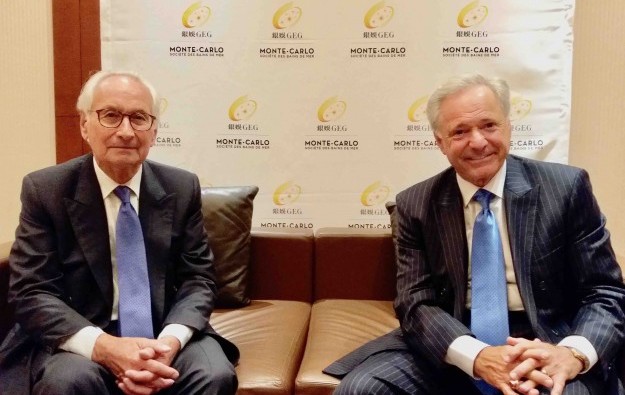 The European partner of Macau casino operator Galaxy Entertainment Group Ltd has given GGRAsia some insight into the thinking behind the likely joint push for a Japan casino licence.

On Friday at the Japan Gaming Congress in Tokyo – a casino industry event to discuss the nascent Japanese sector – we spoke on the sidelines to Jean-Louis Masurel (pictured left), managing director of the Monegasque firm’s overseas development arm, Monte-Carlo SBM International Sarl; and to Michael Mecca (pictured right), Galaxy Entertainment director and advisor to the board, about the tie-up.

“We wanted to expand in Asia, and we decided it would be stupid to try and do it alone,” Mr Masurel said.

“It wouldn’t make sense if we had neither the human nor financial resources to do so. So that’s why we wanted to have a partner,” he added.

Referring to Galaxy Entertainment, he further stated: “We were very pleased to find one of the strongest partners of all, both from a management point of view and a financial point of view.”

Mr Masurel then made reference to the Grimaldi family, the hereditary rulers of Monaco, a tiny but upmarket principality surrounded by French territory, and which is on the north coast of the Mediterranean Sea.

“We wanted a long-term relationship, and the fact it [Galaxy Entertainment] is controlled by a family – as we are controlled – through the [Monaco] government by a family, which is the Prince [Albert], was a good fit,” said Mr Masurel.

The executive said: “We knew whatever we could do together [with Galaxy Entertainment] we could build it for the long term. It’s not a three-year or five-year agreement. When we signed the cooperative agreement, it’s for eight years, renewable for eight years and then for periods ad vitam.”

Mr Masurel stated: “It’s highly likely that we will do it, but we are not compelled to do it. It’s an association of free partners.”

GGRAsia asked Mr Mecca whether the cordial relationship between members of the Lui family – Hong Kong entrepreneurs who founded Galaxy Entertainment – and the Chinese government, might hinder the firm’s chances of getting a Japan gaming licence. Relations between China and Japan have been strained at times in recent years, over issues including claims to certain islands in the region.

“From a geopolitical point of view, we feel the two countries are working more closely together,” said Mr Mecca.

Regarding the recent strengthening of the Japan team, including the hiring of Ted Chan as chief operating officer for Japan, Mr Mecca said: “Over the last several years we have been evolving our team.”

He added: “We started several years ago, forming an association with one of the most significant hoteliers in Japan, Mike [Yukio] Isa, who had been 35 years with Hyatt [Japan K.K.]. Mike has done a very very good job introducing the brand of Galaxy, and all of us, to business leaders and officials in Japan.”

Mr Mecca noted: “Having Ted [Chan] move to Japan, to become our chief operating officer of Japan development… was part of the move toward the development phase [of the sector].”

Other appointments mentioned in a Wednesday press announcement were James Takagi as head of commercial, Ayumi Takagi as head of planning and media relations, and Satoshi Okabe, a former executive at Japanese media group Dentsu Inc, as general manager.

The verdict – and eventual sentencing – in the case involving Alvin Chau Cheok Wa (pictured in a file photo) and other defendants linked to the now-defunct Macau casino junket Suncity Group Ltd... END_OF_DOCUMENT_TOKEN_TO_BE_REPLACED