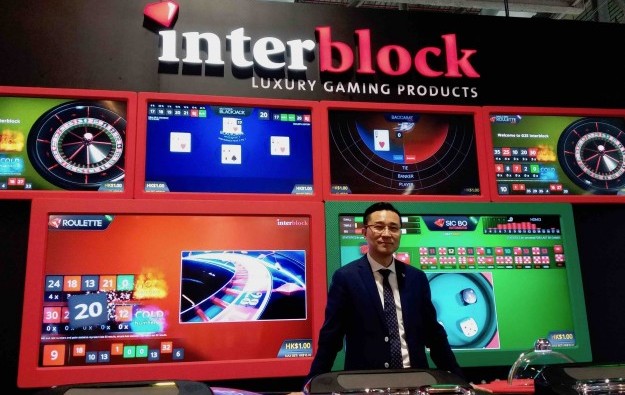 Interblock DD, a specialist in the supply of casino electronic table games (ETGs), has updated its Interblock Stadium product to add ‘mood’ music for different phases of the table games that can be played on the platform.

“At betting time – maybe 60 seconds – the music can be more quiet,” he told GGRAsia at the brand’s stand during the recent Global Gaming Expo (G2E) Asia 2018, a casino industry trade show and conference held in Macau.

“When the ball is launched, the music can get more energetic; and when the ball drops into the pocket, there is different music there as well. When the game is over, there is a different tune as well,” he noted.

Mr Hu said the move was inspired in part by feedback from customers in the Vietnam market, who noted players there like to have an emotional connection with the game.

“For large casinos, the product can feature… dealer-assisted games,” stated Mr Hu. “But for the Macau market we have an LT Game [Ltd] patent restriction, so we can’t do live dealers here. But outside of Macau, we do that everywhere,” he added.

In March, Interblock announced it had completed it’s first stadium-style installation in a South Korea casino. In early May, the firm said it had expanded its footprint in Asia with installation of new electronic table game units in Vietnam and the Philippines.

Another product popular in the emerging Vietnam market is Interblock’s StarBar player terminal for use on bar tops, said Mr Hu. Each play station can either be used as an automated standalone bar top gaming machine or can be connected to a wider system in order to offer dealer-assisted or automated games; including those based on dice, cards and roulette.

Also on display at G2E Asia was Interblock’s MiniStar Roulette. It is available with either five, six, eight or 10 seats, and with either a single-zero or double-zero roulette wheel.  The product incorporates all of the same features of its larger cousin, Interblock’s Diamond Roulette. The difference is that the smaller footprint makes is suitable for smaller venues, and also appeals to those players that want to watch the wheel closely as it spins.

“We make the distance between the seat and the centre of the machine very small, so people can watch closely the spinning of the wheel. Some people like that,” noted Mr Hu.

“We have supplied 10 sets of this, with one set offering 10 player stations… so 100 stations in total,” stated Mr Hu.

It is likely that Macau will shortly have a third round of citywide centre-based Covid-19 testing in little more than a week, after the results so far of a second mass test – that was due to finish... END_OF_DOCUMENT_TOKEN_TO_BE_REPLACED