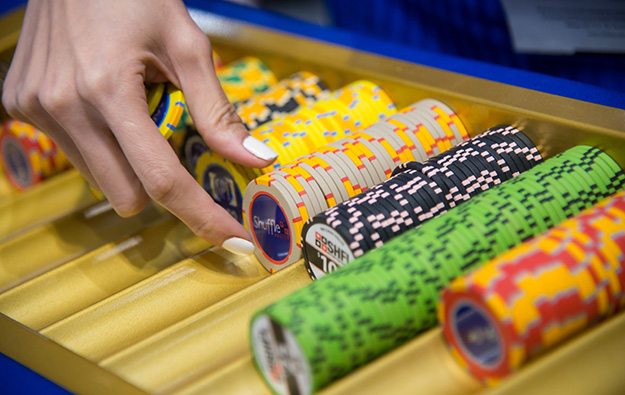 The proportion of Macau mass-market gaming tables offering minimum bets of HKD2,000 (US$258) or above during August was the highest in the market for 11 months. That is according to proprietary research by brokerage CIMB Securities Ltd.

CIMB said such mass-market tables – which it dubbed “premium” – accounted for 34 percent of the total operating in the market during the month of August. A further 42 percent were “mid” tables, with minimums mostly of HKD1,000 to HKD2,000; while the remaining 24 percent were “grind” at HKD800 minimum bets or below.

The research noted that Studio City had the highest percentage of “mid” mass tables in August, at 64 percent. Galaxy Macau was the property that focused most heavily on “grind mass” in that month (35 percent), followed by Sands China Ltd’s Venetian Macao (32 percent), the report added.

Macau’s casino gross gaming revenue (GGR) rose 1.1 percent year-on-year in August, to approximately MOP18.84 billion (US$2.36 billion), according to data released on Thursday by the local regulator, the Gaming Inspection and Coordination Bureau. It marked the first time in 27 months that such revenue had not contracted, judged year-on-year.

Investment analysts had diverging views on what role promotions and aggressive marketing – and advantageous hold rates on baccarat games for the city’s casinos – might have played in the August swing to year-on-year GGR growth.

“The lift in promotional activity came from the existing operators who were trying to defend their market share,” noted Harry Curtis and Brian Dobson at Japanese brokerage Nomura, referring to the effect on the market of the opening on August 22 of Wynn Palace, a property noted for pursuing high-end customers.

“We believe that Wynn Palace had a positive contribution to the market in August, with its 1,700 hotel rooms,” said analyst Christopher Jones of the Buckingham Research Group.

Nomura said it was not clear whether August’s market wide numbers “are sustainable once the stimulants are either relaxed or removed”.

The institution added, referring to the opening of Sands China’s new property on September 13: “September’s results would normally be a better indicator, but the opening of the Parisian [Macao] is likely to keep these [marketing] policies in place.”

Brokerage Sanford C. Bernstein Ltd had a different perspective on the competitive landscape currently in Macau.

“Galaxy VIP remains most at risk of cannibalisation in the market as new properties continue to open. Overall, all [Macau] peninsula properties should generally continue to see declines in market share. However, the market participants remain rational – there seems to not be any major discernable pick up in market wide promotional activity,” said analyst Vitaly Umansky.

David Katz and Brian Davis of Telsey Advisory Group LLC noted: “August results are clearly improved versus July, although we do not have indications of movement in hold percentage, which can materially impact results.”

Macau’s August GGR growth was not only the first such monthly year-on-year expansion since May 2014 but also “the highest absolute dollar amount of non-holiday GGR since April 2015’s MOP19.2-billion,” said a Thursday note from Grant Govertsen of Union Gaming Securities Asia Ltd. The August performance would have been better but for some adverse weather and a “tough” calendar, he noted.

“Importantly, there were two factors that actually suppressed GGR during the month: Typhoon Nida that struck during the first days of August (midweek), and a tough calendar with two fewer weekend days this year,” said Mr Govertsen. In Hong Kong, Signal No. 8 was raised during the typhoon, causing the temporary suspension of ferry services to and from Macau.

“September could be lacklustre; but the key is ‘high season’ in October/fourth quarter,” noted analysts DS Kim and Daisy Lu of JP Morgan Securities (Asia Pacific) Ltd, referring to the so-called ‘Golden Week’ holiday surrounding China’s national day on October 1. It is typically a strong trading period for Macau casinos.

JP Morgan forecast September GGR to fall by 2 percent to 3 percent year-on-year, to between MOP16.7 billion and MOP16.8 billion; the equivalent of MOP555 million to MOP560 million per day.

A committee of the Thai National Assembly looking at the issue of casino resorts for that nation has suggested it could be viable to have five, spread across the country, as localised drivers of... END_OF_DOCUMENT_TOKEN_TO_BE_REPLACED