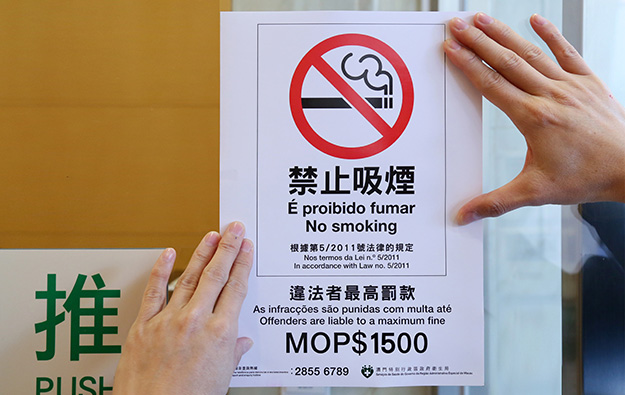 Staff from Macau’s Health Bureau took part in 1,126 anti-smoking patrols on the city’s gaming floors in the first 11 months of 2019.  The checks were done jointly with officials from the local casino regulator. The tally of patrols was up 42.4 percent year-on-year, said the Health Bureau in an update late on Thursday regarding its enforcement work.

Such inspections resulted in 1,287 instances of alleged smoking rule violations being identified and acted upon; 18.9 percent fewer from the prior-year period, according to the document. Those incidents accounted for 25.9 percent of public smoking infractions citywide in the 11 months to November 30.

Up to December 31 last year, VIP rooms had been the only places in Macau casinos where smoking was still legally permitted at a gaming table. New rules on smoking in public places in Macau had come into effect on January 1, 2018, although a one-year grace period for the casino industry meant VIP room table side smoking had been possible for a further 12 months.

As of November 30, the Health Bureau had given permission for an aggregate of 631 new-style smoking lounges – as required under new legislation – for a total of 33 gaming venues in the city.

The Health Bureau noted on Friday that as of last month it had received requests for an aggregate of 664 smoking lounges from 35 casinos in Macau. It didn’t name them, nor did it identify those venues that had simply chosen not ask permission for new-style smoking lounges.