More than 12,500 rooms under construction in Macau 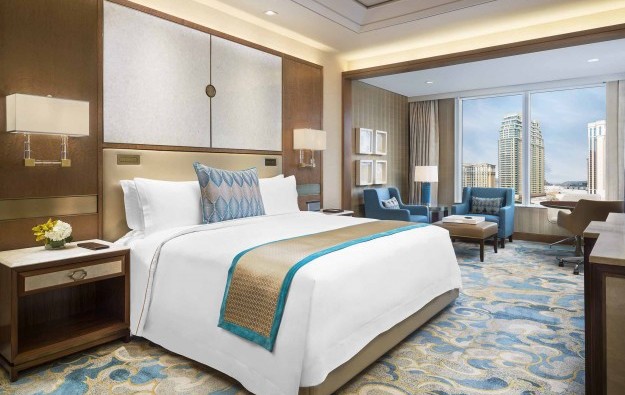 There were 22 hotel projects under construction in Macau and 30 projects undergoing government approval at the end of the second quarter of 2015, official data from the local government show.

They would together provide close to 21,100 new hotel rooms for Macau. In total 12,500 of them are already under construction. The data do not give estimated completion dates for the new hotel projects.

The Macau government data show the majority of the new hotel room supply will be located on Cotai, where the city’s casino operators are developing new large-scale casino resorts offering, in aggregate, more than 10,200 hotel rooms.

The St. Regis Macao (pictured), the fourth and final tower of the Sands Cotai Central casino resort complex, is scheduled to open on December 17. The property, developed by Sands China Ltd, will feature 400 guest rooms and suites.

The number of hotel guests in Macau however has declined for six consecutive months since January judged against year-prior periods. A total of 852,531 guests were recorded in June, down by 2.7 percent from a year earlier, according to official data.

The number of hotel guests in the second quarter of 2015 fell by 4.4 percent year-on-year to 2.54 million. The average hotel occupancy rate stood at 77.3 percent in the three months to June 30, down from 85.1 percent a year earlier.

Macau’s visitor arrivals in the seven months to July 31 decreased by 3.5 percent from the prior-year period, to 17.41 million.

Macau mass-market casino gross gaming revenue (GGR) for the recent Chinese New Year (CNY) holidays could have recovered to at least 60 percent of that for the 2019 break, when the festivities were in... END_OF_DOCUMENT_TOKEN_TO_BE_REPLACED