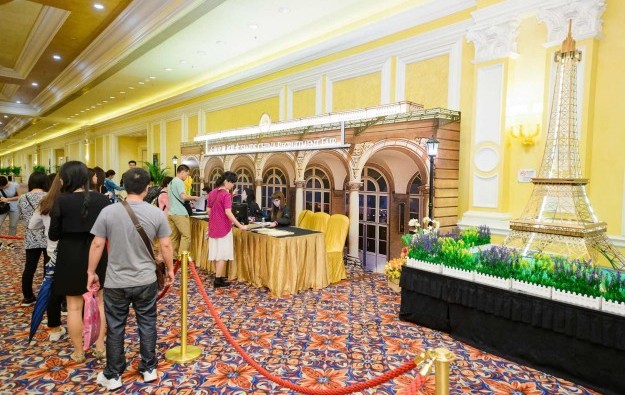 More than 160 work contracts were signed by Macau residents during a recruitment fair offering non-gaming jobs at local casino operator Sand China Ltd, including ones at the company’s new Cotai property, the Parisian Macao.

A total of more than 1,500 Macau residents attended the two-day event, which took place at the Venetian Macao on Tuesday and Wednesday, said the firm.

The Parisian Macao is set to open in September, the company confirmed last week, without specifying a date. It also did not specify whether that would be a partial or full opening of the property.

Approximately 900 vacancies across 80 types of job positions were available at the recruitment fair, according to a press release from Sands China.

All vacancies were for technical positions and non-gaming positions in departments such as housekeeping, food and beverage, the front office and the concierge desk, as well as in stewardship roles.

“New team members will be assigned to work at different Sands China properties according to operational needs,” said the company.

“Our first priority and commitment is to hire Macau local residents as our team members, whom we see as the foundation of Macau’s diversification and growth into a world centre of tourism and leisure,” said Antonio Ramirez, senior vice president of human resources for Sands China.

The development of Macau as a “world centre of tourism and leisure” is a policy aspiration of the Macau government as it attempts to diversify the city’s economy from a previous focus on high stakes gambling.

The Macau government announced on Tuesday tightening of its Covid-19 testing requirements for front-line casino staff, halving the interval between nucleic acid tests to every two days, from every... END_OF_DOCUMENT_TOKEN_TO_BE_REPLACED