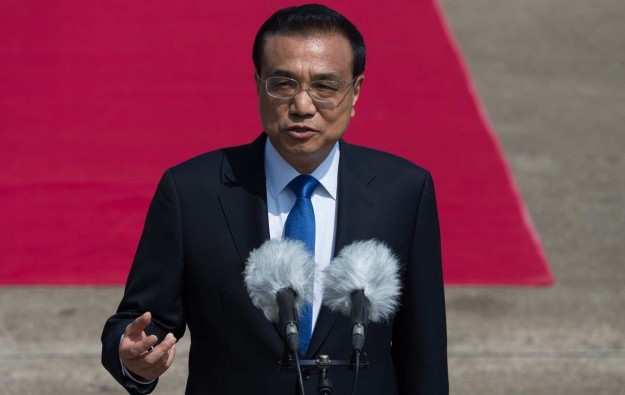 Macau casino gross gaming revenue (GGR) for the first 10 days of October suggests the month could end with year-on-year growth in the range of 3 percent to 12 percent, according to a cross-section of investment analysts, citing unofficial industry data.

The majority of the brokerages giving commentary indicated that the forecasts for October performance would have been even more robust, were it not for the visit to Macau this week of Chinese Premier Li Keqiang (pictured).

“Historically, VIP gamblers have avoided the market during visits by key officials. Given the recent uptick in VIP business, this visit could crimp revenues over the next week or two,” said a note on Tuesday from analyst Cameron McKnight at brokerage Wells Fargo Securities LLC.

A number of other analysts also gave commentary on the visit.

“While there have been media reports about China providing a positive policy boost to Macau during the visit by Li Keqiang, with respect to gaming directly we do not see any such direct policy initiatives. There have been broader comments made about supporting tourism and MICE [meetings, incentives, conferences and exhibitions] business in Macau, which may be positive [for gaming] in the longer run,” said brokerage Sanford C. Bernstein Ltd.

Premier Li was also during his visit given a briefing on the progress of the Hong Kong-Zhuhai-Macau Bridge, an infrastructure project that will drastically shorten road travel times between Hong Kong and Macau’s gaming resorts, by spanning the Pearl River Delta.

“Importantly, the Premier continues to openly support Macau as a growing leisure and entertainment region, highlighting the region’s opportunity to develop a convention and exhibition business,” stated the Buckingham Research Group Inc in a note on Tuesday.

“The Premier also hinted at new policy and support from the central government, to help this become a reality. We would view the completion of the Hong Kong-Zhuhai-Macau Bridge as being the primary step in making this a reality,” said analyst Christopher Jones.

“This compares to the first 11 days of [October] last year at HKD753 million. Admittedly, the comparisons are not entirely apples to apples, as last year’s number includes a day of ‘non’ holiday volume. Despite the opaque year-on-year comparison, it appears that Golden Week was truly golden for all of Macau and the combination of increased hotel capacity and strong demand drove performance for the week,” said Mr Jones.

On Sunday the Macao Government Tourism Office said the number of visitors to Macau climbed 8 percent year-on-year to 1.15 million tourists, during the October 1 to 7 phase of the “Golden Week” holiday period, a festive season that can span more than seven days depending on what day of the week the October 1 anniversary of China’s National Day occurs.

“Our checks suggest premium mass and VIP are performing well, but grind mass has been soft as this group has been allocating their discretionary spending towards other entertainment activities,” said Wells Fargo in commentary on the gambling portion of the tourism market in the first 12 days of October.

The number of visitors to Macau from mainland China increased by 6.9 percent year-on-year to 970,000, accounting for 84 percent of the total visitor arrivals during the first seven days of October, according to official data.

“We understand from channel checks that the Parisian has had strong mass play while Wynn Palace was showing strong VIP results and a good pick up in premium mass,” said Tuesday’s note from Sanford Bernstein, referring first to the Parisian Macao, a new Cotai property promoted by Sands China Ltd, and which opened on September 13; and second to Wynn Macau Ltd’s new resort which opened on August 22.

“We will need to wait until third-quarter earnings results to get a better sense of how strong the [Macau] mass recovery may actually be and how market share is beginning to shift,” added analysts Vitaly Umansky, Zhen Gong and Yang Xie.

“October GGR is up against a comparison of a 28.4 percent decline [year-on-year in October 2015], which is more challenging than September’s [2015] 33.0 percent decline,” noted Telsey Advisory Group LLC analysts David Katz and Brian Davis on Tuesday.

“We note that September was the second consecutive month of fundamental GGR growth in Macau, after over two years of declines,” they added.

“The next few weeks will be key to watch as we monitor closely on how the market fares in the off-season period,” said a Tuesday note from Japanese brokerage Nomura.

According to figures provided by the city’s hotel industry and quoted on Sunday by the tourism authority, the average occupancy rate of Macau hotels in the first seven days of October was 92.3 percent. The figure represented a year-on-year increase of 5.1 percentage points.

“According to data from the Macao Government Tourism Office, average room rate for hotels during Golden Week was down 1 percent year-on-year. This is significantly better than our survey and channel checks were suggesting,” added the brokerage.

The Macau authorities announced on Friday some of the key aspects of a bill proposing a new regulatory system for gaming that will shape how the industry looks for years ahead. Macau’s Executive... END_OF_DOCUMENT_TOKEN_TO_BE_REPLACED