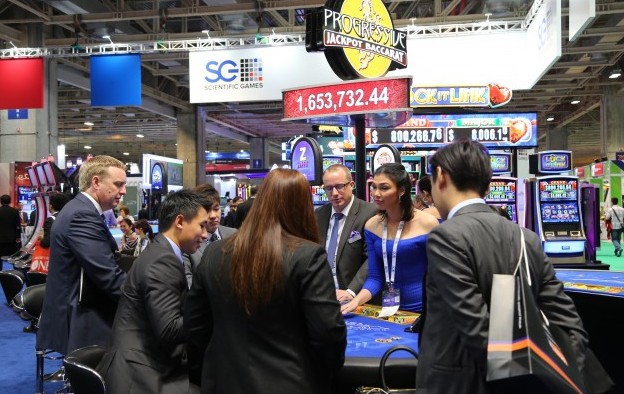 The 2016 edition of Global Gaming Expo (G2E) Asia recorded an increase in both the quantity and the quality of trade visitors, one of the event co-organisers told GGRAsia.

G2E Asia is an annual casino industry trade show and conference held in Macau. This year’s edition took place between Tuesday and Thursday, at the Venetian Macao casino resort.

On the first two days of G2E Asia 2016, the event welcomed almost 8,600 trade visitors, representing an increase of 9 percent compared with the same period of the 2015 edition, according to the organisers.

“We are very happy with the results,” Ms Lee said. She highlighted both the “quantity and the quality” of the trade visitors, saying many were decision-making buyers from casinos across Asia.

G2E Asia 2016 featured a total 180 exhibitors, a 12 percent increase on last year’s show. More than 40 percent of this year’s exhibitors were newcomers to the event, according to the organisers.

“I also heard a lot of good feedback from the conference delegates,” Ms Lee said. “We had refreshed the conference programme, to become more targeted and that was appreciated by delegates.”

Ms Lee added that, for next year’s edition of G2E Asia, the organisers were considering featuring targeted conference tracks, focused on specialised topics.

She added that G2E Asia 2017 already was looking busy regarding exhibition space bookings. “Many G2E Asia 2016 exhibitors have already confirmed that they are coming back next year,” Ms Lee stated.

She also confirmed there were no plans to move the event out of Macau. “The only plan is we will be expanding,” Ms Lee said.

South Korea on Thursday said it would from June 1 resume issuing short-term tourism visas for trips to the country’s mainland, for individual visitors and groups of tourists. Permits for... END_OF_DOCUMENT_TOKEN_TO_BE_REPLACED