Morpheus at City of Dreams Macau to open Jun 15 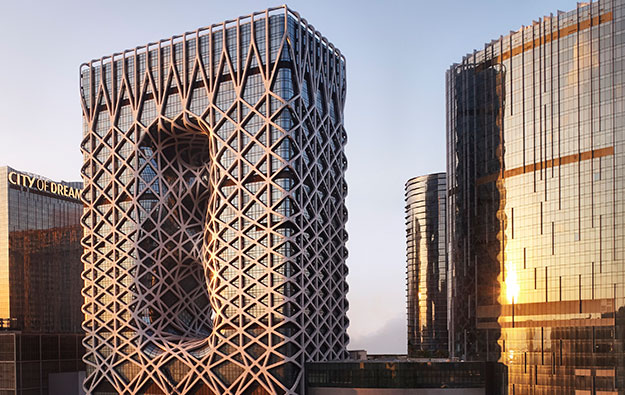 Following the launch of Morpheus (pictured) next month, the casino operator plans to start an extensive revamp of one of the other three existing hotel properties – temporarily branded as The Countdown – at City of Dreams Macau. The renovation works will start after the 2019 Chinese New Year festive period – in early February –, and lead to the temporary closure of the hotel for about 18 months, Mr Ho said. The tower will be rebranded as “Libertine”, he added.

The Countdown name was introduced in July last year, replacing the Hard Rock brand at City of Dreams Macau.

With a price tag of US$1.1 billion, Morpheus was designed by award-winning architect the late Dame Zaha Hadid. The luxury hotel will feature about 770 rooms, plus restaurants and gaming, in a total gross floor area of 150,000 square metres.

“Morpheus is really the anchor for our global re-launch [of City of Dreams Macau] after nine years of operation,” Mr Ho said. “It is the final, and probably the most important phase, because Morpheus is built specifically for the premium mass segment.”

Although Morpheus will have a floor dedicated to gaming, Mr Ho did not tell reporters how many new-to-market live gaming tables Melco Resorts planned to apply from the government, in order to populate the venue.

“There has been no one spending US$1.1 billion in a hotel tower – it is enough to build a resort,” he noted.

“The investment is pretty large and we hope the Macau government will reward our efforts and grant us [new gaming] tables,” he continued.

Mr Ho did not rule out the possibility of moving existing tables from other properties operated by Melco Resorts to Morpheus, if the government table grant was considered  insufficient.

Mr Ho added that Morpheus was currently undergoing all necessary inspections to receive the required licences needed for operation. “So we humbly target the opening date of June 15,” he added.

Melco Resorts had announced earlier this month it planned to spend approximately US$100 million in aggregate over the next 12 months in order to upgrade the gaming areas and non-gaming attractions at City of Dreams Macau and Studio City.

Mr Ho said on Tuesday that the renovation works on the ground floor of City of Dreams Macau were expected to be completed next month, followed by the start of works on the second floor.

Mr Ho also confirmed that City of Dreams Macau had recently ended a partnership with the PokerStars brand of online poker and poker tournaments. He said the decision was made because the collaboration was not profitable.

“But in line with our philosophy of always trying new stuff, we are opening a dedicated eSports stadium at Studio City hopefully before the end of the year, and we are also opening Asia’s largest virtual reality zone at Studio City,” he said.

“Studio City has a younger vibe for the mass audience and that’s why we want to continue to experiment stuff there,” he said.

Concerning Studio City, Mr Ho did not provide a budget for the development of phase two of the casino resort. But he said the investment would “not be small”, as phase two would have a gross floor area of over 2 million square feet.

“We are glad that the government granted us a three-year extension [for the completion of phase two],” Mr Ho said. “But everything has to be completed by July 2021, so we hope we will start some groundwork this year.”

Mr Ho said Melco Resorts was still discussing with the other venture partners on the details of phase two of Studio City. But he said it would feature new-to-market attractions and entertainment offerings.

Commenting on the licence renewal process for Melco Resorts in Macau, Mr Ho said he was “confident” the firm would have its gaming concessession extended. The city’s six current licence holders are to see expiry of their current rights in either 2020 or 2022.

He also suggested the Macau government to be prepared to revisit the issue of Macau’s 39-percent gaming tax – “the highest in the region” –, in the light of what he said was strong regional competition from lower-tax jurisdictions targeting the same customer base.

“More and more jurisdictions like Vietnam, Cambodia, the Philippines and Japan are eyeing the main tourism source market of Macau, which is [mainland] China,” Mr Ho stated.

The Melco Resorts boss also said the stong performance of Macau’s gaming industry so far this year had beaten the firm’s initial expectations. According to data from the Macau gaming regulator, the Gaming Inspection and Coordination Bureau, market-wide gtoss gaming revenue rose 22.2 percent year-on-year in the first four months of 2018.

“I now expect [Macau market-wide] gaming revenue to rise 15 percent for the entire year. It will be difficult [for growth] to top 20 percent due to the larger [2017 comparison] base in the second half [of the year],” he added.