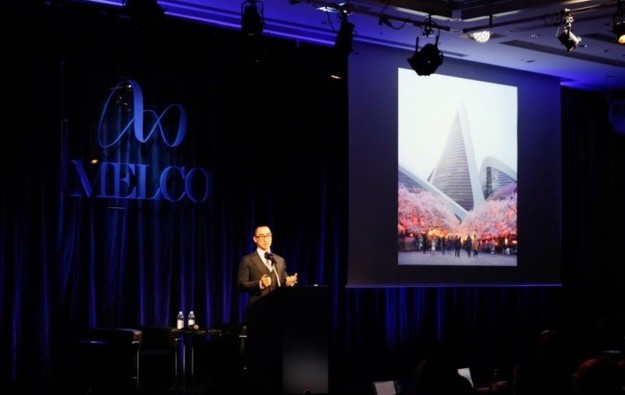 Asian casino developer Melco Resorts and Entertainment Ltd revealed on Thursday in Tokyo a concept for a gaming resort it would like to build in Japan.

It is dubbed “The City of The Future” and images of it shown at the event indicate several peak-like structures and curved roof arches. A press release issued that day didn’t specify in which Japanese city such a resort might be constructed.

The company also announced additions to its management team for a Japan casino bid, and said it would use what it described as a “state-of-the-art biometric intelligence system for responsible gaming” that would be “integrated throughout the entire property,” were Melco Resorts permitted to build such a venue.

The company referred specifically in its press handouts after the event, to “facial recognition technology,” understood to refer to technology that can access digital database information about physical characteristics of people and match it against captured images of people wishing to enter a privileged or otherwise restricted area such as a casino. Addressing the issue of problem gambling has been a key concern for Japanese experts and government decision makers before legalisation of a Japanese casino industry can be concluded, possibly next year.

In a press release, Melco Resorts described its proposed Japan venue as “a celebration of cultural heritage and contemporary architecture”. The document added: “The complex draws from the most iconic of Japanese motifs – the rising mountains of Japan.”

Lawrence Ho Yau Lung (pictured), chairman and chief executive of Melco Resorts, was quoted as saying of his firm’s resort concept, and referring to other markets where the group has invested: “Some details may change along the way, what absolutely will not is this: we will do in Japan what we have done since our very first day, what we have delivered in Macau, the Philippines and Cyprus – build with local partners, invest in extraordinary world-first architecture and design, create sophisticated entertainment experiences, and embed state-of-the-art technology into everything we do.”

In Macau, the firm commissioned the late Dame Zaha Hadid to develop the striking US$1-billion Morpheus hotel tower at City of Dreams. The new facility is due to open in the first half of 2018.

Mr Ho has gone on record on many occasions expressing his support for the Macau government’s desire to diversify its economy from dependence on high-stakes gambling.

In February he said while on a visit to Tokyo his company would “absolutely spend whatever we need to win” a Japan casino licence.

On Thursday The Financial Times newspaper quoted Mr Ho as saying that if Melco Resorts were to win a Japan licence, “Japan would be 100 percent of my time. I will move here . . . and move the [company] headquarters to here.”

Thursday’s press handouts on behalf of Melco Resorts stated of the planned biometric technology to be used at any Japan resort built by the company: “Developed directly by Melco Resorts, the biometric intelligence system would make the proposed Melco Resorts integrated resort the safest and most protected site possible using commercial technologies today.”

According to the media materials, Melco Resorts announced during Thursday’s event that it would also offer the Japanese government “back-end access to, and data-sharing with, these systems free-of-charge to ensure the most effective collaboration in safeguarding against potential gaming-related social issues”.

Ako Shiraogawa, recently appointed as president of the group’s Japan office, was quoted as saying – regarding the biometric technology it would like to use in Japan – that it would deal with the “government’s ongoing consideration of how to uphold socially safe integrated resorts”.

She added, addressing the ongoing debate about invasion of privacy and risk of misidentification via the use of biometrics: “Its back-end technology can be updated as regulations evolve and on the front-end, the state-of-the-art biometric interface eliminates nearly all risk of human error.”

Bloomberry Resorts Corp – the operator of Solaire Resort and Casino (pictured) in the Philippine capital Manila – on Wednesday announced in a series of filings, that an aggregate of just over 7.9... END_OF_DOCUMENT_TOKEN_TO_BE_REPLACED