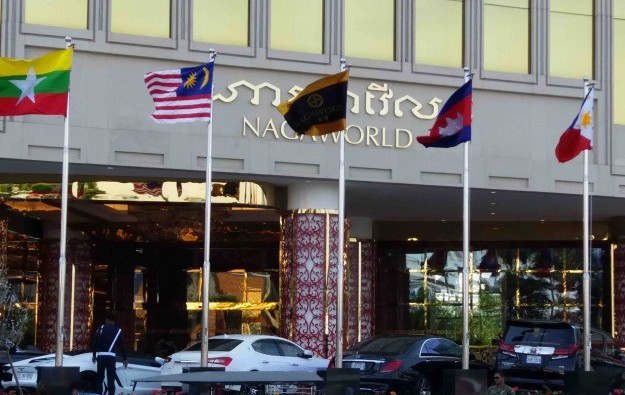 NagaCorp Ltd believes it is on track for a 94-percent increase in gross gaming revenue (GGR) for the first nine months of this year.

The Cambodian casino operator told the Hong Kong Stock Exchange on Monday the unaudited operating results of the group’s gaming business indicate that GGR would likely exceed US$1.07 billion for the nine-month period since it opened the Naga 2 extension to its NagaWorld gaming facility in the country’s capital, Phnom Penh.

“Riding on the successful opening of Naga 2 [pictured] in November 2017, the group continues its trajectory of growth, which is supply-driven. Sustained and accelerated gaming business volume growth was recorded in the nine months,” the company announcement said.

The group attributed its performance to factors including: what it termed “continued political stability” in Cambodia; growth in the number of tourists visiting Cambodia, especially Chinese tourists; the opening of its Naga 2 casino resort; a strengthened management team; greater confidence in the financial strength of the company; what it termed the “good standing” of its debt; and organic growth, with another extension to NagaWorld, to be known as Naga 3, already being planned.

Naga 2 is a 900-room extension to NagaCorp’s existing facility. It has interiors designed by renowned casino architect Paul Steelman, an underground shopping mall called NagaCity Walk that connects the new and old sites, at least 300 gaming tables, and some 2,500 electronic gaming machines.

NagaCorp said in its latest filing that the “success and fast ramp-up of Naga 2” was one of the main factors that led the firm to advance the plan for Naga 3. Those latter facilities will increase both gaming and non-gaming infrastructure at NagaWorld.

The statement to the Hong Kong exchange said NagaWorld’s average hotel occupancy rate was more than 85 per cent in September.

In light of the strong performance flagged in NagaCorp’s voluntary announcement on the first nine months of trading in 2018, Union Gaming Securities Asia Ltd analyst Grant Govertsen stated the brokerage had maintained its “buy” rating for NagaCorp stock and its price target of HKD10 (US$1.28) per share.

In a note issued on Monday, Union Gaming said NagaCorp annual earnings before interest, tax, depreciation and amortisation would be US$450 million this year and US$464 million next year.

“The 2019 estimates bake in a 5.5-percent GGR tax, which, while we expect it to be implemented in early 2019, could be even further delayed and therefore yield significant upside to our model [US$84 million in GGR taxes in 2019],” the note said.

The brokerage noted in a summary on NagaCorp’s performance up to the end of the third quarter: “Naga 2 continues to ramp very nicely”.

Macau’s casino gross gaming revenue (GGR) for the first five days of February is estimated at MOP1.9 billion (US$235.1 million) – or MOP380 million per day – a level that suggests a “45... END_OF_DOCUMENT_TOKEN_TO_BE_REPLACED