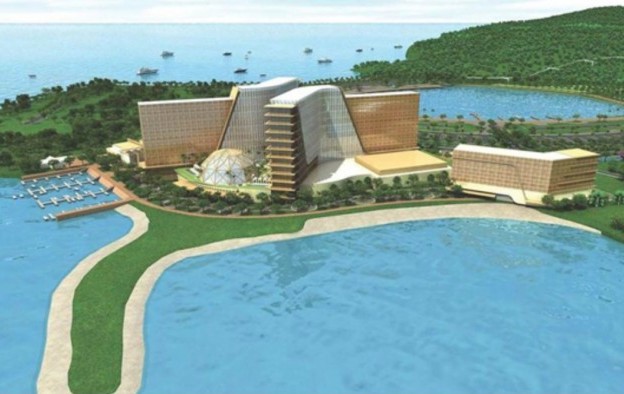 Hong Kong-listed casino operator and developer NagaCorp Ltd has broken ground on its planned gaming resort in the Russian Far East and is to move forward with the first phase of construction. The news was confirmed to GGRAsia in an email from company chairman Tim McNally.

“We had the ground breaking ceremony at end of May and will be moving forward with construction of [the] first phase. Budget for first phase will be in range of US$150 million to US$200 million,” said Mr McNally.

In an interview in November, Mr McNally had mentioned there might be three phases of construction for the casino scheme (pictured in an artist’s rendering) in the Primorye region. The area of Russia near to the port of Vladivostok has borders with, respectively, China and North Korea. The first phase budget mentioned in November for NagaCorp’s Russian venture was estimated at between US$50 million and US$70 million.

The development is part of an economic regeneration scheme labelled by the local government variously as the “Integrated Entertainment Zone of the Primorye Region”, or “Primorsky Entertainment Resort City”, also known as “PERC”.

Another casino resort in the zone is nearly ready and is due to open by August 28, according to a Hong Kong filing in May by Summit Ascent Holdings Ltd. The scheme, dubbed as “Tigre de Cristal”, is majority-owned by Summit Ascent, a firm controlled by the Macau and Philippines casino developer and operator Lawrence Ho Yau Lung.

In September 2013, Mr Ho pledged to invest US$700 million in the gaming resort, signing a deal with the Russian authorities.

NagaCorp had previously stated – following the autumn 2013 announcement of its Russian investment agreement – that its resort would have 100 gaming tables, 500 electronic machines, a large theatre facility to accommodate 2,000 people as well as entertainment offerings such as a karaoke complex and spas.

NagaCorp said in its 2014 annual report filed with the Hong Kong Stock Exchange in March: “We expect that the PERC project will commence operation not later than 2018.”

The firm added: “The group believes that its strategy of diversifying its business geographically and expanding into a new casino market will drive revenue growth in the long term.”

NagaCorp is also expanding its facilities at its flagship casino resort NagaWorld in the Cambodian capital Phnom Penh. The company said in a February regulatory announcement that NagaCity Walk – a shopping complex NagaCorp is constructing next to NagaWorld – should be open by the first quarter of 2016.

NagaCorp is also said to be among bidders for a new round of casino licences in South Korea.

A casino cruise brand reportedly controlled by Malaysian entrepreneur Lim Kok Thay is to launch services from Singapore fewer than five months after the Lim family-founded Dream Cruises brand of the... END_OF_DOCUMENT_TOKEN_TO_BE_REPLACED