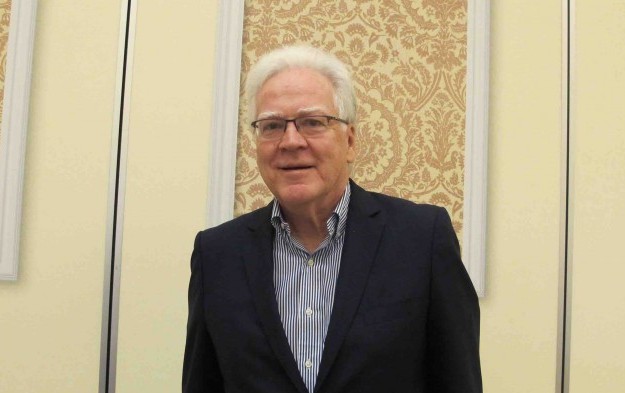 Hong Kong-listed casino operator and developer NagaCorp Ltd is “in a position to take a look” at new development opportunities if they are sufficiently attractive, said the firm’s chairman Tim McNally (pictured) in comments to GGRAsia.

NagaCorp has an exclusive licence to operate casinos in Cambodia’s capital city, Phnom Penh, and its surroundings. The company is developing a second casino resort in Vladivostok, Russia.

Referring to the scouting work of the company in other markets, Mr McNally told GGRAsia in an interview: “We’ve been in Japan and in many other places, and while we have to be mindful of our investments, by the same token we have the type of profile now and relationships with financial institutions where we are in a position to take a look at fresh opportunities.”

NagaCorp has expressed interest in a Japanese gaming licence. The company took part in the Kyushu-Nagsaki IR Business Connect, a seminar on casino investment and that was held in Sasebo in late June.

“We’ve got to be realistic and mindful about our commitments, but we are not closing our eyes and just limiting to where we are. We’ll keep looking at opportunities,” said Mr McNally, without providing details.

The company’s biggest commitment now is an expansion – designated as the third development phase – of its NagaWorld casino resort in Phnom Penh. NagaCorp has a 70-year licence for land-based casino gaming, valid until 2065, and a 41-year gaming monopoly, ending in 2035, for activities within a 200-kilometre (124-mile) radius of the Cambodian capital.

The company started operations via the original NagaWorld property, which is sometimes referred to as Naga 1. It opened in December 2006. That venue is now linked – via an underground walkway lined with shops and known as NagaCity Walk – to Naga 2, an expansion that opened in November 2017. Naga 1 and Naga 2 combined are now described officially by the company as the NagaWorld Complex.

“Our monopoly as it currently exists goes to 2035. We have an appreciation for the time that we have, and we need to maximise our opportunity,” stated Mr McNally. “The decision to proceed with Naga 3 was thought about extensively.”

He added: “The decision for Naga 3 is tied to maximising our monopoly licence but also to what we’ve seen evolve and develop in the country.”

In April NagaCorp said it expected to invest US$3.5 billion in Naga 3, which will add 4,720 hotel rooms to the complex and a 12-level “multi-entertainment podium”.

The firm said it was in a position to add up to 800 gaming tables – mass and VIP - and 2,500 electronic gaming machines within Naga 3. The new extension will also feature an indoor “digital theme park” and space for meetings and conventions.

“We are the leader in the hospitality sector in Cambodia … and we see continued growth, not only with Chinese tourists but visitors from around Southeast Asia,” Mr McNally said in his comments to us. “Phnom Penh as an urban area is going to continue to grow; and I don’t think that the tourist numbers are overly optimistic.” Cambodia’s tourism authorities expect visitor arrivals to the country to increase to 12 million by 2025, according to official forecasts.

NagaCorp’s chairman said that Naga 2 allowed the company “to have the type and quality of property that met the expectations and standards of higher-end customers”. That expansion also enabled the company to attract the biggest Macau junket operators to the property, giving the company “more exposure, and an ability to raise table limits,” said Mr McNally.

The company took “a great deal of satisfaction” from the progress and growth it had seen, noted the chairman. “We are optimistic that we are going to have some positive [operating] numbers as we move forward, based on our additional facilities.”

NagaCorp posted a 53.1 percent year-on-year increase in net profit for full calendar 2018, to US$390.6 million; and 60-percent growth in adjusted earnings before interest, tax, depreciation and amortisation (EBITDA) to US$525 million. The growth was fuelled by a 54.9-percent jump in gross gaming revenue, to nearly US$1.43 billion, according to data published in February.

“The basic framework is done for the financing of Naga 3,” Mr McNally told GGRAsia. “We’re pretty confident that this decision is going to serve us well. It demonstrates a lot of confidence and commitment from Dr Chen both in the company and our growth potential.”

The executive said additionally that construction of its casino resort in Russia “is moving at a good pace right now”.

“The [opening] date we are talking about now is approximately the second quarter next year,” stated Mr McNally. “It’s a new challenge, a different experience in terms of operating environment but we’ll have a similar approach as we did in Cambodia.”

A casino cruise brand reportedly controlled by Malaysian entrepreneur Lim Kok Thay is to launch services from Singapore fewer than five months after the Lim family-founded Dream Cruises brand of the... END_OF_DOCUMENT_TOKEN_TO_BE_REPLACED