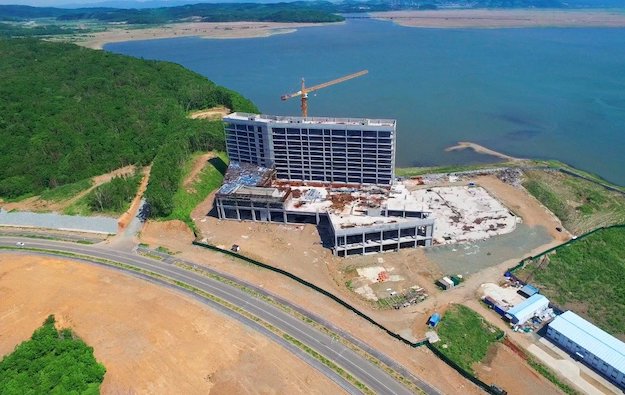 Casino developer and operator NagaCorp Ltd says the company will “suspend the development” of its gaming resort in Vladivostok, in the Russian Far East. Construction works are to be suspended “indefinitely until the circumstance is clearer,” stated the company in a Thursday filing.

NagaCorp said the casino resort project (pictured in a file photo) was “surrounded by various uncertainties”. Thus, the “company would like to invoke the force majeure clause set out in the investment agreement and suspend its performance thereunder,” it added.

The firm said the decision was “in the interest of the company and its shareholders.” It said it would issue further announcements “when appropriate”.

The Hong Kong-listed company was planning to invest about US$350 million to build a casino, hotel and exhibition venue in the Russian province of Primorsky Krai, which shares a border with China and North Korea. Aside from a casino, the first phase of the scheme was to feature a four-star hotel with 279 rooms.

Since 2013, a number of tentative deadlines for completion of the Russian scheme had been set and then revised by NagaCorp. The firm had a ground breaking ceremony on its Primorye site in May 2015.

In February this year, NagaCorp said construction of the project in Russia was progressing.

“The construction of hotel tower block structure was completed. The contractor is constructing the roof slab of the casino podium, while the construction of the ballroom has reached level 1,” noted the company in its annual report, published last month. It also said it expected to proceed this year with construction of the façade, as well as mechanical, electrical, plumbing and architectural works.

In Thursday’s announcement, NagaCorp made no mention to Russia’s invasion of Ukraine as a reason to suspend its project in Vladivostok.

But as governments around the world have responded to the Ukraine crisis with sanctions to the Russian regime, an increasing number of companies have been taking steps to limit their business exposure to Russia.

NagaCorp’s project was to be part of the Primorye Integrated Entertainment Zone (IEZ), a casino development area located 50 kilometres (31 miles) from Vladivostok.

There are currently two casinos in operation in the area. Hong Kong-listed Summit Ascent Holdings Ltd runs Tigre de Cristal, the first casino resort to open at Primorye. The Shambala casino resort, run by an entity called Shambala CJSC, was the second to launch there.

Macau recorded 965 “gaming-related” crimes in full-year 2022, down 29.7 percent on the 1,372 identified in the previous year, according to the latest statistics published on Tuesday by... END_OF_DOCUMENT_TOKEN_TO_BE_REPLACED