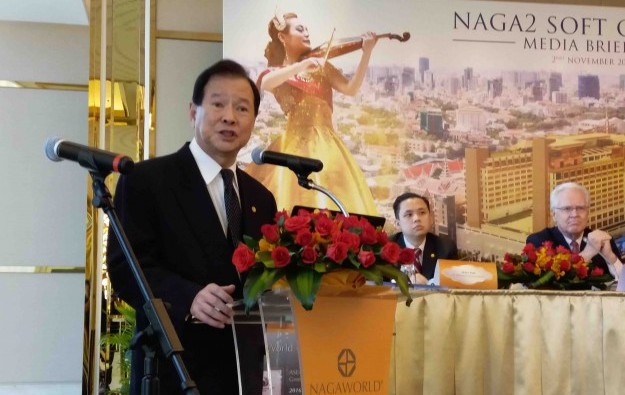 Even as Cambodian casino operator NagaCorp Ltd opened Naga 2, a 900-room extension to its facility in the country’s capital, the firm’s founder and chief executive Chen Lip Keong (pictured left) was outlining a strategy to capture gambling business from the four corners of China and potentially the Japan market too.

“The chairman [Tim McNally, pictured right] and I have been travelling to Japan… to Hokkaido. We have seen the Hokkaido government, to look at the possibility of whether we could put a casino in the northern part of Japan,” Mr Chen told media at a Thursday briefing for the soft launch of Naga 2.

But he flagged the interest might be in creating a smaller, regional facility, rather than a multibillion U.S. dollar property in one of Japan’s mega cities such as Tokyo or Osaka.

“US$10 billion for a casino construction is a lot of money,” he stated, referring to a capital cost for a large-scale Japan venue mentioned by several of the large U.S.-based casino operators.

“I think one has to balance how much of GGR [gross gaming revenue] can [be captured] and how much is the investment cost. I think you would agree with me that [even a casino] can become bankrupt. From our point of view, it’s about finance discipline. How much do we want to put in, and how much return is coming along?

“Looking at it from this objective, if you spend US$369 million, I am confident we can be very successful,” stated Mr Chen.

He noted: “We want to be a global player… we have investment [in Cambodia] of US$1.5 billion; our market cap is US$3.5 billion; and [property services firm] Colliers International values us at US$5.1 billion. And yet, we do not have a single cent of borrowing – which is important. It means we have the capacity to expand not only within Cambodia, but also beyond Cambodia.”

Naga 2 – with interiors designed by renowned casino architect Paul Steelman – is connected to the original NagaWorld in Cambodia’s capital, Phnom Penh, via a subterranean shopping mall called NagaCity Walk. Naga 2 will account for “at least” 300 gaming tables and “at least” 2,500 electronic gaming machines in the Cambodian operation, according to a company briefing note issued on Thursday.

Naga 2 also has 3,800 square metres (40,903 sq feet) of shopping space; room for meetings, incentives, conferences and exhibitions (MICE), and theatre seating capacity for 2,200 people, as well as parking space for 400 vehicles. Naga 1 and Naga 2 combined are to be known in future as the NagaWorld Complex.

The firm quoted on Thursday data from the country’s Ministry of Tourism, indicating that in the first eight months of 2017, the visitor tally to the country from China was up 44 percent year-on-year, to about 700,000.

“My vision is of Naga [the brand] as a dragon… it curves around China… and the northeastern part of Russia, and the north of Mongolia.”

The firm is already advancing construction on a casino resort near Vladivostok in Primorsky Krai, in the Russian Far East, which is also close to China’s northeastern border.

Mr Chen explained, referring to another country immediately north of China: “If we can place a casino at a strategic location in Mongolia… I think we can make it work… I have seen the Prime Minister of Mongolia… we are still discussing it with them [the authorities].”

Referring also to a Central Asia country on China’s western border, Mr Chen said: “I have also seen the First Deputy Prime Minister of Kazakhstan, to consider the possibility of placing a casino… [in] Kazakhstan and [near] China. It is a challenging environment. But having made things work in an emerging market [Cambodia] I think we can be present in this [other] emerging market… We can clone the success here and transplant that success in that part of the world.”

In July, NagaCorp reported a 20.3 percent year-on-year increase in net profit to US$150.6 million for the six months to June 30. The growth was fuelled by a 39.6-percent jump in GGR.

Mr Chen stated the group is also interested in running a casino in Nepal to capture border trade from neighbouring India and China.

NagaCorp has also been in talks with authorities in mature economies.

“We were recently invited [for discussions] by the Queensland government… We told the host government we don’t build monuments, we build jobs…we don’t spend billions of dollars… if you look at the reality of a market, you have to see how much GGR is there,” said NagaCorp’s chief executive.

“I think the Australian [authorities] liked our approach of considering practicalities… only when we think it is workable, do we come up with some… project.”

Macau’s casino gross gaming revenue (GGR) for the first five days of February is estimated at MOP1.9 billion (US$235.1 million) – or MOP380 million per day – a level that suggests a “45... END_OF_DOCUMENT_TOKEN_TO_BE_REPLACED